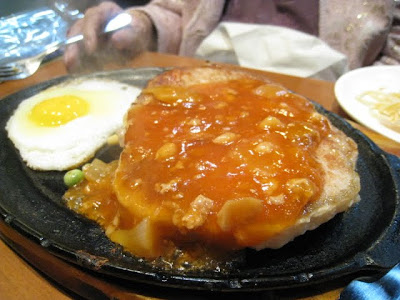 Kid friendliness: high chairs available and lots of finger foods. steak might be too chewy for some. 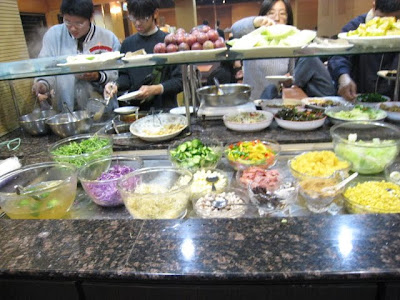 When I was a kid, Sizzler and Todai were the two special event places to go for dinner in my family. When I was in middle school, Sizzler might have been one of my favorite places to eat. I could get your own soup and pick and choose what to put on my salad. My sister and I got to have garlic bread. Best of all, my parents were in a good mood because we had a coupon and we could eat steak and all you could eat salad/soup. It would be at least 15 years until I'd even hear about or eat at Morton's or Ruth's Chris or Lawry's or BOA. To us, Sizzler = steak = good times.

So to me, when I eat at a place like Chia Chia Steak, even though my tastebuds are a lot pickier and older, I can understand the popularity. An affordable night out for the family, with a sizzling steak for each person, plus a salad and ice cream buffet. Shrimp chips. Curly fusilli pasta. Corn. 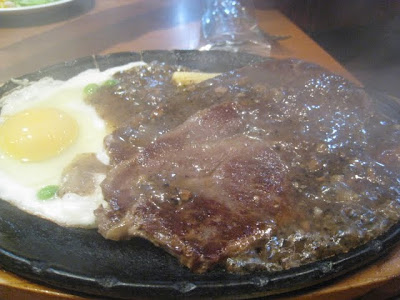 Even though the steak is bit chewy for me and I wonder why it's drenched in overpowering sauce that I end up scraping off, I see tons of happy kids and families chowing down and waiting in line for their seats.

In this case, my grandma's friends wanted to take us to dinner. The menu is in English and Chinese and has different cuts of steak available, as well as lamb, pork and chicken- you can also order just the salad bar. Most of the sizzling plates are under NT$300 with the most expensive cut being the US Choice Sirloin at NT$450 (or about US$14). 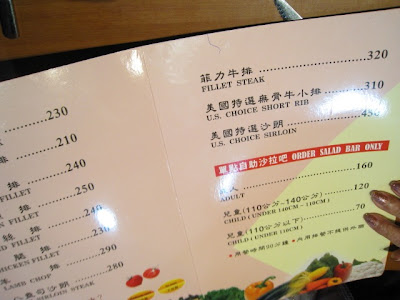 I hoped for the best after seeing the menu, plunged into the pasta and lettuce at the salad bar. 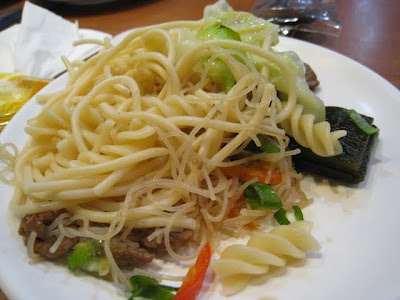 I was strangely addicted to these UFOs (Unidentified Fried Objects)- I think they were squid? 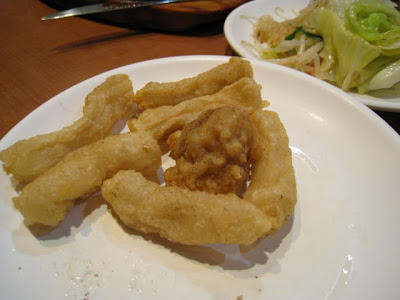 I had asked for mushroom sauce on my steak, but instead it came with a spicy pepper sauce sauce. I just scraped it off and tried it with the Chinese A1 steak sauce and ate the fried egg. I know that sizzling steaks on the cast-iron pans are popular in Taipei- I've had them before at the night market and food courts. 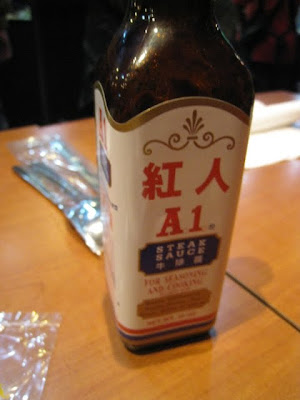 And try the day glo ice cream at your own risk. It was artificial tasting and sugar sweet, but you know that's the kind of things that a kid loves, right? So Chia Chia Steak might be the Chinese Sizzler that some will remember fondly when they grow up. 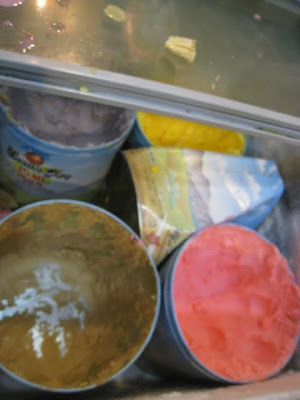 But if you're feeling nostalgic, there actually is a Sizzler in Taipei. I've been a looong time ago, when my uncle would treat us when we'd visit from the states, but I haven't been in at least 10 years. Where are the best sizzling steaks in Taipei?

Oh man. I used to think these sizzling steaks were good too--memories from when I visited Taiwan as a kid. But I have to say, the worst meal we had the ENTIRE time we lived in Taipei had to have been at one of these local "steakhouses"--in fact, looking at the address, there's a distinct possibility that it may have been the very same one you went to!

The corn starchy sauce is just gross, and there's really no overcoming the low grade of beef they use.

Gee, I haven't seen or been to a Sizzler for such a long time! Thanks for bringing back memories. Chia Chia looks so different compared to Sizzler, and I am amazed to see a chinese A1 steak sauce. I have not seen that before anywhere in Asia yet!

abstractpoet: hahahah.. it probably was the same one. I know the sauce is so gross

eattraveleat: haha. thanks for the comments..

Haven't been there recently. I think abstractpoet is right - most cheap steak-chains aren't very good, but this popular one is Japan isn't too bad: