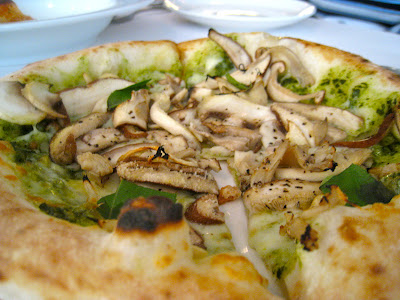 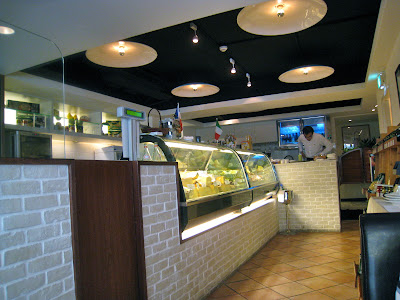 Primo Trattoria is the kind of place that I could imagine stopping by for lunch or dinner more often if I lived in walking distance. An elegant Italian restaurant serving appetizers, pizzas and pastas as well as a deli counter that you can take home imported cheeses, pastas and wines. The modern, white space is nice enough to have a romantic night out or a large group celebration, yet not too stuffy to have a casual dinner out. The restaurant is split into two sections which can see each other through the glass windows, a semi-open kitchen in the center and a private room in the back. 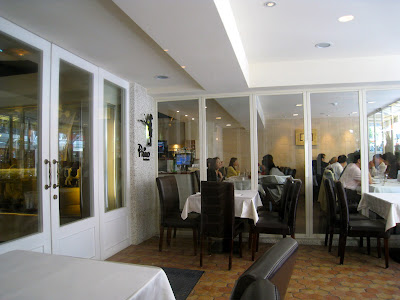 The lunch specials are an affordable NT$260-$340 with a range of pastas and pizzas and come with soup, salad and coffee or tea. 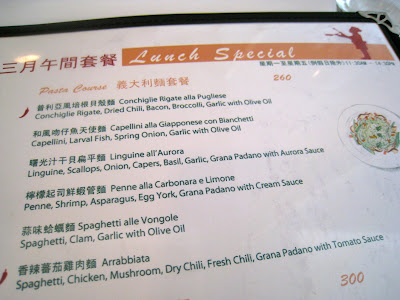 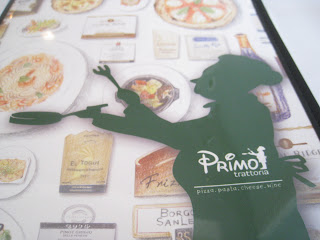 That day we could choose between six different pastas like the Spaghetti alla Vongole or Penne alla Carbonara e Limone or a penne pasta with cream sauce and egg yolk with shrimp and asparagus or 4 different pizzas. 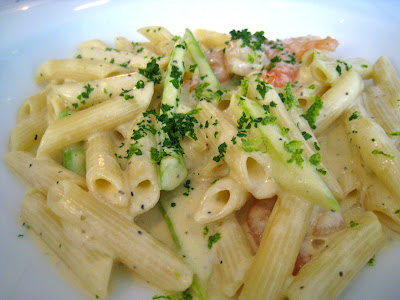 My favorite dish was the tripe in spicy tomato sauce with Primo bread (NT$340). The bread was made from the same dough as the pizza and was a wonderfully chewy sponge to soak up the spicy sauce. We liked it so much we asked for more bread, but got regular side bread instead- I guess we should have asked for Primo bread. 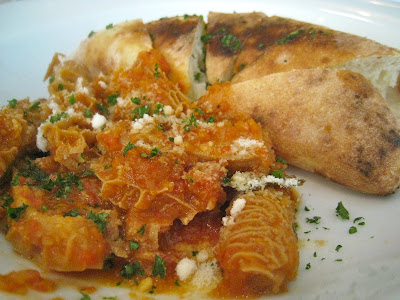 The Zuppa del Giorno soup of the day and Insalata di cesare caesar salad were light and made with fresh ingredients. They have parmesan that they shave for the salads. 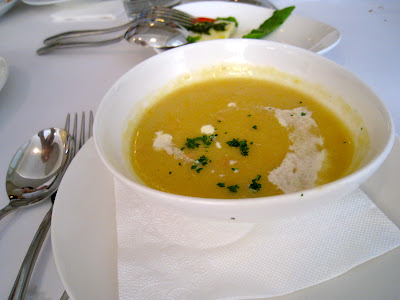 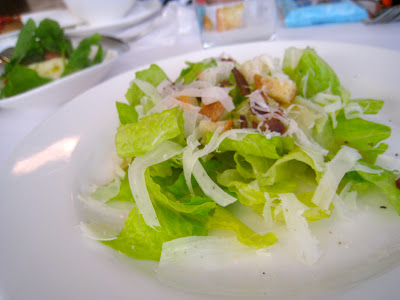 We also tried a few of their appetizers- the bruschetta and caprese. The portions are perfect for one person or a couple. The toast for the bruschetta (NT$100) was slightly burnt and flavors of the tomatoes were not as robust as I would have liked. 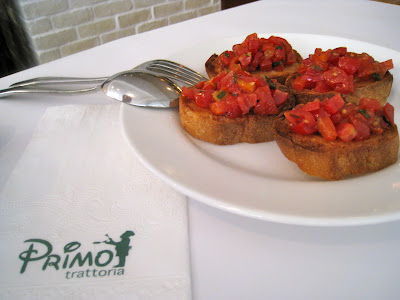 The mozzarella for the caprese (NT$120) wasn't as milky as I'd had before and the tomatoes not as sweet- but I did like the arugula to add a layer of sharpness. After the appetizers, my friends and I agreed that we preferred Macaroni Grill's. 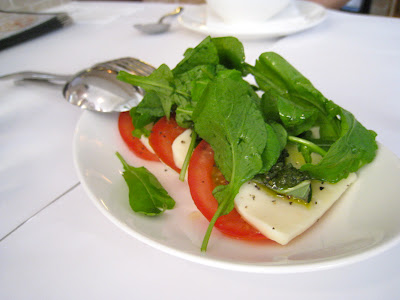 But the pizzas... the pizzas were a hit. If you aren't avoiding carbs, then you'll happily devour the chewy crusts, which rises above the rest of the thin crust pizza topped with fresh ingredients. Our Pizza Genovese (NT$300 for set lunch) had pesto sauce, mixed cheese and sliced mixed mushrooms. The lunch special pizzas are smaller than their regular pizzas, but still large enough to share. 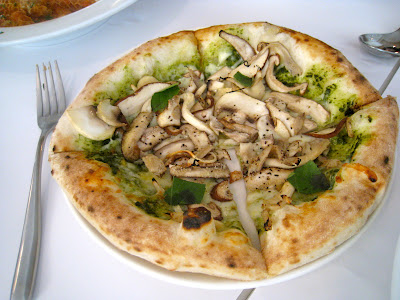 On my second visit, we got the recommended Fiorentina pizza (NT$360) which has a soft cooked egg in the center of spinach, bacon, garlic and cheese topped pizza. The egg is put on the pizza after it's taken out of the oven and breaks when the pizza is sliced. 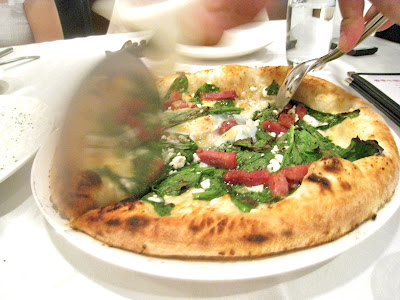 My friends and I were a bit nervous about eating a practically raw egg and asked if they could put the egg on a little earlier. I think they obliged, but the egg was still far from being done. But it mixes in with the flavors of the pizza and provides a unique (though runny) layer to the pizza. Definitely give this a try if you want to try something different.

On my second visit, I gave a different set of appetizers a try. The Proscuitto di Parma (NT$360) was pretty classic, and the Fritto Misto (NT$200) was a lot smaller than I expected it would be, with one shrimp and a couple of calamari rings. 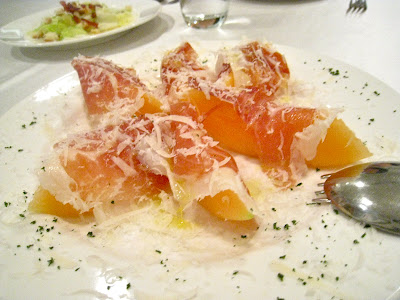 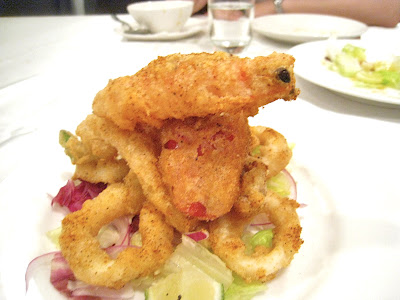 The Spaghetti alla Pescatora (NT$400) is probably a better bet if you are looking for seafood with al dente spaghetti. 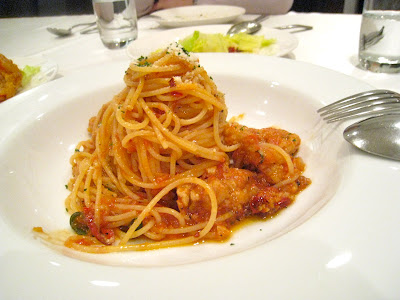 At the end of the meal, you have the dessert tray to ooh and aah over, which includes tiramisu. panna cotta, gouda cheesecake or puddino bianco. One of their specialties is a freshly made Mascarpone Dolce (NT$100) which is fresh mascarpone cheese with raisins mixed in. Ugh- I wish they offered something else, chocolate chips or something along those lines, to mix in because I loathe raisins. 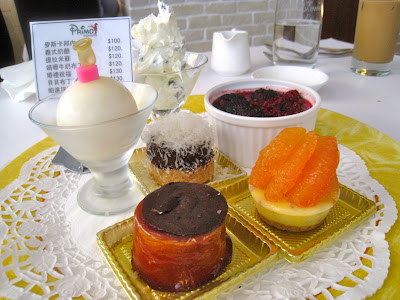 So we settled on the panna cotta (NT$120) topped with berries which was a nice way to end the meal. 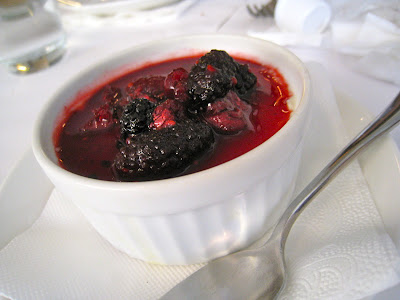 Just look for the Primo signs with the Disney-esque lettering if you want to go. Reservations are also recommended as the restaurant were very full both times I went. 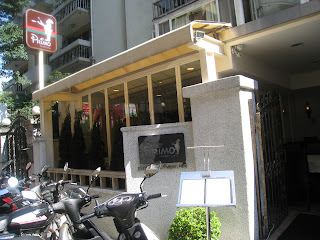 yummmm... those carbs are killers!!!

and here i was thinking i was the only one to loathe raisins. gross.
have been here for lunch twice. i tried the chilled pasta which was very refreshing and the egg yolk with shrimp. yummy but i want to go back to check out the rest of the menu.
but oh... the cheese plates. heaven.

baby madison: yup... but the primo bread was so good!

stefanie: hmm, those both sound good. i'll have to try the cheese plate. and yes, raisin haters unite! hehe