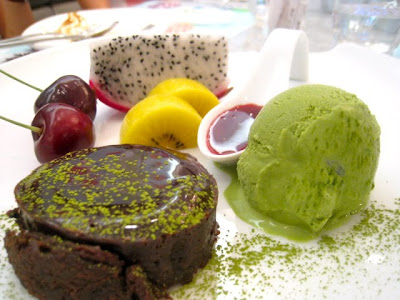 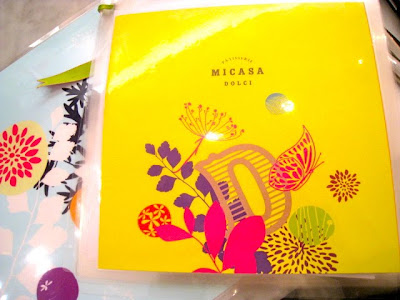 If eating is an art, then Micasa Dolci presents its desserts for your viewing and tasting pleasure.

From the purple umbrellas that welcome you at the entrance to the chandelier-decked vibrant walls in the decor and menu to the intricate plating of the desserts, to appreciate Micasa Dolci one probably has to appreciate the entire "experience." 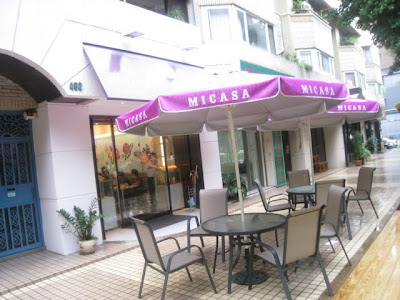 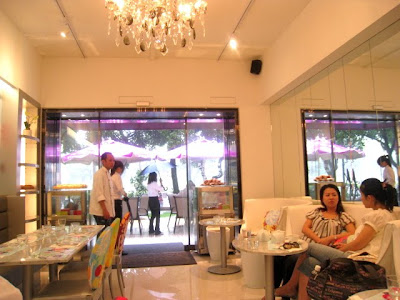 Because if you just take the food for face value, it's going to be a pricey bite per dollar ratio. While I enjoyed most of the artfully crafted sugar rushes, it's not everyday you'll spend NT$400 on one of the smallest chocolate molten cakes I've seen yet. 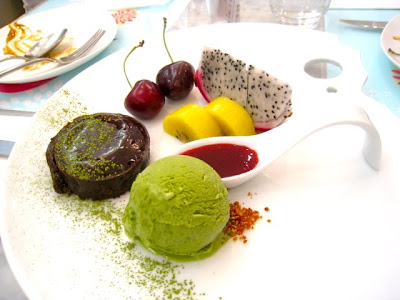 But maybe that's the point- To savor the flavors and enjoy each bite. And since these desserts were split among girlfriends, we pretty much all got just a taste or two. And you could taste the richness of the chocolate they used.

The dusting of matcha powder on the cake led the way to a scoop of house-made green tea ice cream which had a wonderful aromatic flavor. We weren't sure what to do with the spoonful of raspberry sauce, decided to dip a little of the cake in it. 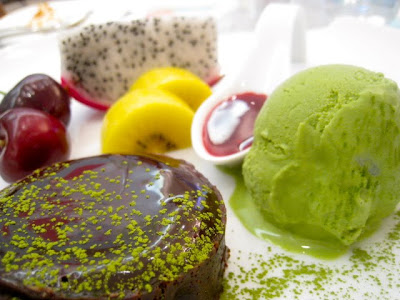 My favorite though, was the caramel ice cream with banana (NT$350), garnished with savory sabayon sauce. The whipped custard sauce tasted as if it had been topped with sugar and caramelized which gave the caramel ice cream slightly burnt crunchy creme brulee coating. It was like two awesome desserts married in one- creme brulee meets banana split makes the perfect dessert baby. 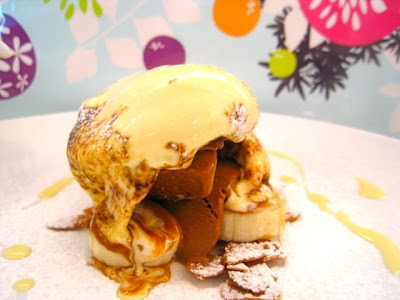 Less impressive was the cream puff (NT$70), which I picked partially because it was one of the cheapest desserts on the menu (though more expensive than most other cream puffs). It turned out to be a moot point, as there was a minimum NT$200 per sitting customer amount each person had to spend, so we ended up having to order some tea for the table. 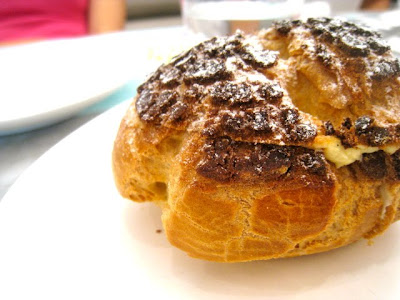 The puff itself was a bit dry and lacked moistness and flavor in the meat of the pastry that the cream wasn't able to compensate for. The other ladies at the table barely touched it, and it went unfinished. I would have rather eaten a puff and half from Beard Papa's instead.

You can give the sculptural baked seasonal fruit pie with ice cream (NT$350) a try, which looked like a dressed up, grown up version of the Hostess fruit pies I used to love as a kid, decked out in strings of sugar and dusted with powder. 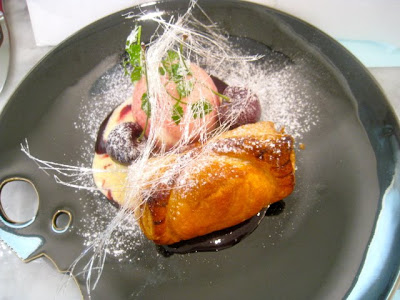 Somewhere under there is some strawberry ice cream and apple pie, which is more crust than filling. It would have been great if they could have stuffed it a little fuller with apples to balance out all the flaky crust. 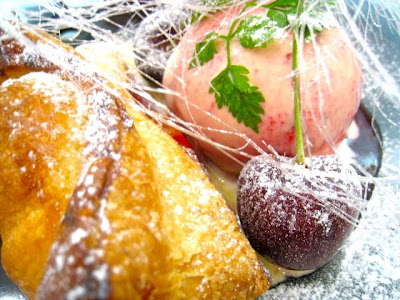 So if you're a dessert first person or looking for a place to sit down after taking touristy pictures across the street at the Sun Yat Sen Memorial Hall, you can give Micasa Dolci a try. I'm not sure if I would go out of my way again to eat there again, but it's worth a visit if the desserts look worth the price to you. Other exotic sounding desserts on the English, Chinese and Japanese menu included coffee jelly with vanilla pudding and caramel sauce, tiramisu with sesame ice cream, sweet potato montblancs or grenandine peach compote and honey ice cream. They offer some lunch sets as well, that day curry or tea sandwiches were available.

You can even pick up pints of their ice cream from the freezer or boxes of cookies to go. Just call ahead and make sure they are open because the last few times I've driven by at different times, it looked closed. 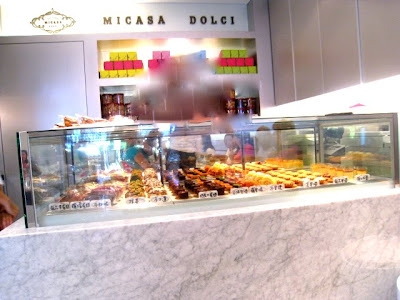 View hungry in taipei restaurants in a larger map
Posted by joanh at 10:27 AM

If my tongue could get hard, it would have while reading this post.

Mm. Was that too dirty for this PG blog? :X