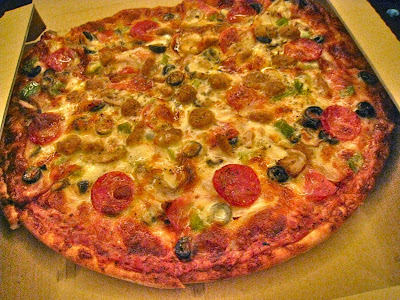 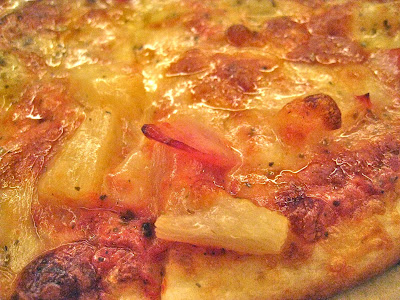 Is a pizza just a pizza? Maybe not, if the name is one like "Chicago Pizza Factory." With this name, I started daydreaming about stuffed pizza with spinach and mushrooms like Zachary's, with tall buttery crust that held in all the baked goodness inside. 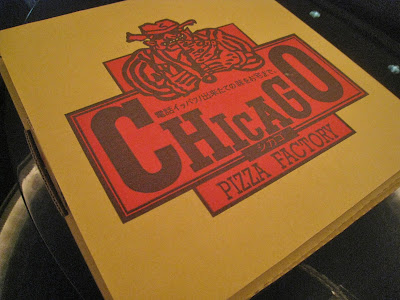 Stuffed pizza it's not. But it's good pizza, and more importantly, good service.

I wanted to order pizza for a party over the weekend, but I wanted pizza where the crust wouldn't get hard if people didn't eat it right away. I'd never tried Chicago Pizza Factory, but they won last year for "Best Delivery" on my Hungry Readers Best of Taipei poll, so I thought I'd order a test run few days earlier.

When I called to ask for delivery, the owner said it was only possible with 2 pizzas from how far I lived from them, but they were having a special 2 pizzas for NT$800. I was okay with that and the owner happily made recommendations since I didn't have a menu (and they don't have one online, but you can try to decipher this one.) with pizza names like Boss No. 1 and Chef's Special. I ended up ordering a large Hawaii (No. 10) and large Chicago No. 8 (which is like a "Supreme combo" with extra cheese, pepperoni, sausage, ham, black olives, green pepper, mushrooms, onions). 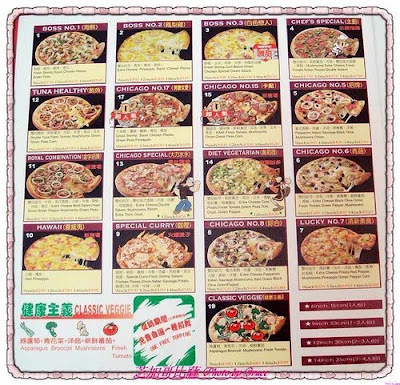 Once the owner could tell I was speaking English, he easily switched to English and asked if I was from the States. When I responded I was, he suggested that I get my pizzas with "extra sauce because the locals like it with less sauce" and people from the US like it with more. You can also choose between thin crust, thick crust or extra thick crust. I opted for one thin and one thick.

He was right- when I got the pizza, it didn't seem like it had more sauce, it seemed just right.

The pizzas arrived promptly before I knew it in about 40 minutes, and came hot. The only slight mishap was the Combo No. 8 pizza slid and was smooshed on one side. 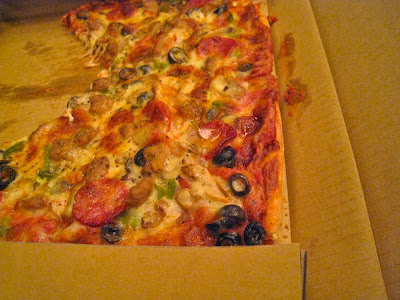 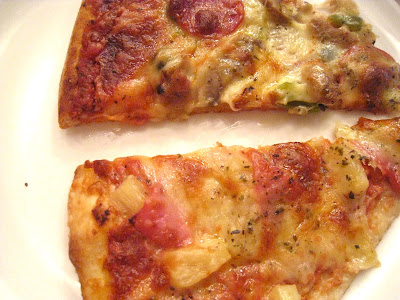 The pizza reminds me a bit of Papa John's- it's not gourmet, but it tastes kind of like home- loaded with fresh ingredients and cheese with lots of sauce and a pliable hearty crust. But if you want to get something for your relatives, they have pizzas topped with shrimp and corn too. Chicago Pizza Factory is actually a chain in Japan and you can see on their website that they have a lot of other localized variations, complete with a tic-tac-toe grid of mayonnaise. 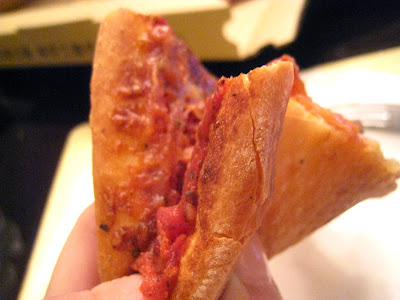 I liked how the crust doesn't get hard when it cooled unlike the pizzas I've had from Famous Larry's or Alleycats, which doesn't deliver. While Famous Larry's does deliver, I've had two bad experiences with their delivery which each took over an hour (the first time over an hour and half) and the second time my order was messed up without much apologies when I called to inform them when I found out. I like their pizzas by the slice when eaten hot, but their crust tends to get rock hard when cooled.

But if it's a rainy typhoon kind of night, you can just stay in and wait for your pizzas. Just don't forget to ask for extra sauce.


View hungry in taipei restaurants in a larger map
Posted by joanh at 12:27 PM

Email ThisBlogThis!Share to TwitterShare to FacebookShare to Pinterest
Labels: $ can't be beat, $$ depends on what you eat, delivery, hungry girl in taipei strongly recommends, pizza, western

I've always wondered about this place. On occasion I'm over in that area and have thought about trying it out. A few years ago, when I saw it for the first time, I didn't have time to try it but did go in and see if it was really Chicago pizza... I left disappointed and figured it was just an average pizza place run by someone who spent a little time in the US. Still... average pizza is better than no pizza and your review has convinced me to give it a try next time I'm over there.

scott: hey scott! yeah, after i ordered, i put two and two together and realized i had passed by the place before as well (and same as you, left disappointed). it wasn't really until so many readers voted for it that i thought i'd give it a try. let me know what you think if you try it out!

me and my belly thank you! :) we're gonna check this place out soooon! :D is extra sauce a lot more money?

hamper: :) i think the extra sauce was free.. let me know if you like it!

Do they have indoor dining or is it just take out/delivery?

You can sit inside. Actually, the place is full of knick knacks from various sources. There are Native American figurines, uncut sheets of dollar bills and various other items to gawk at. Have a look at some pictures I took:

i've been wanting to try this place for the longest time! its like a 10 min walk from my place... definitely will pay them a visit soon! =)

I eating pizza at Pizza Hut Restaurant in World Trade Center in Beijing. It had little sauce in it and hardly any spice or seasoning like tomato paste just not good at all.

Funny KFC in Beijing does not serve cole slaw any where.

They have a deep dish option?

This seems to be great site for providing Pizzadelivery services for people athome. I would surely like to try their service.

Very Very Good. As American as you can get and cheaper than Pizza Hut. Strongly recommend, thanks for the recommendation!

Hi this is Naina here frm India........
Will u plz tell me how to make such a delicious pizza...m thank ful to u Joanh

If you're looking for an American style pizza, this is the best one I've had so far in Taiwan. Back in the states it would be considered pretty good, but in Taiwan where American style pizza is scarce, it is great. Hungry girl is definitely right: order extra sauce. I love how you can get a buy one get one free large (14 in) anytime. I have done this even by myself because it still tastes good as leftovers as long as you take it out of the cardboard and store it in plastic or something in the frig.

Probably the most authentic pizza one can get on Taiwan.

In the US, it would be slightly above average pizza.

For lovers of authentic conventional US style pizza on Taiwan, that's a godsend, at a very reasonable price I might add. Far more reasonable than NY Pizza Kitchen, for example.

If one is willing to forgo the convenience of having them delivered to one's door, one can buy one large 14" pizza (500 to 600NT) and get a second one free.

I've been taking advantage of this deal for the past 10 to 15 years.

Personally I must confess to missing the "nouvelle cuisine" style pizzas at California Pizza Kitchen, from when I lived in LA.