news/taipei: one more month to see Pixar: 20 Years of Animation in Taipei 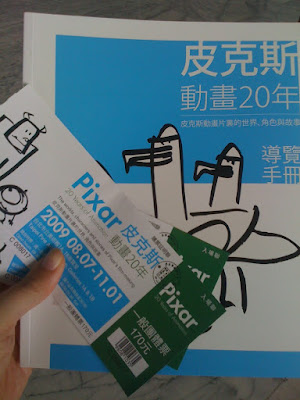 . I teared up at the "When She Loved Me" Sarah McLachlan montage in TOY STORY 2 and of course, at UP

. I loved feeling silly for ever being scared of my closet after MONSTERS INC

. I was giddy like a fan after shaking Brad Bird's hand and getting an autograph after an advance screening of THE INCREDIBLES

. Being fascinated by the behind the scenes drama of Pixar's rocky start when at first no one wanted to distribute Toy Story or make its toys in The Pixar Touch

. I also remember the first time I pored over "The Art of Monsters Inc" and was fascinated by the hand drawn art, the changes in design and story, and the four to six years process that it takes to make an animated feature, that I ended up collecting each one that came out, like the newest Art of UP

So getting to see all the storyboards, character models, hand drawn art and animatics in real life is like taking a walk down memory lane- can you believe it's been almost 20 years since Toy Story first came out?!

Pixar: 20 Years of Animation is at the Taipei Fine Arts Museum, which is a 5 minute walk from the Yuanshan MRT stop. 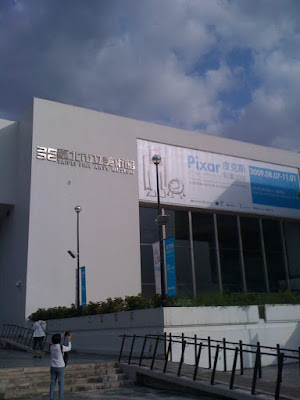 Inside, you'll have life sized sketches of Mike and Scully greeting at every turn. 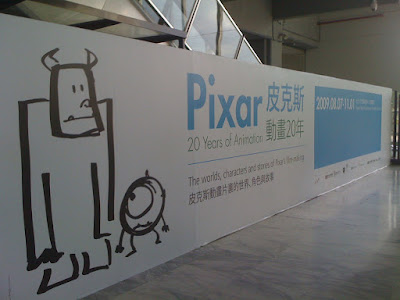 Headsets are available to listen (in Chinese) for more details at certain points. I also picked up a NT$150 program that makes a nice keepsake. 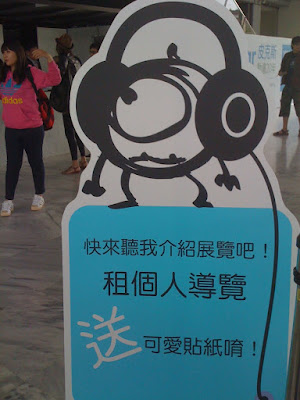 Once upstairs, the entrance is the last place you are allowed to bust out your camera, until you exit the exhibit. (But if you want a peek, one person was able to get some snapshots.) I felt like I was entering into another world, with the appropriate images of the assembly line of closet doors to whisk us away. 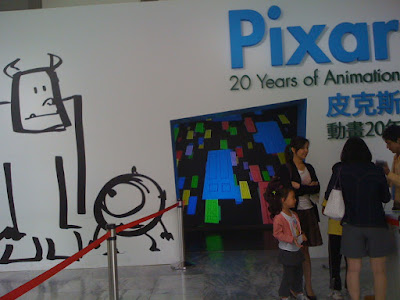 Isn't it cool to see how Pixar takes a black and white sketch and creates full blown 3D characters that we've grown to love? It's always more than just the images, it's also the stories that have created a worldwide fanbase. 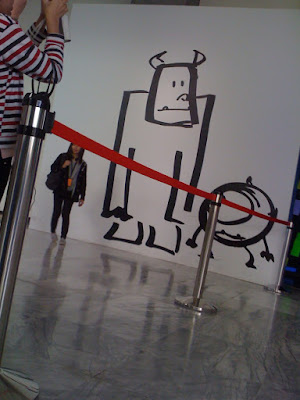 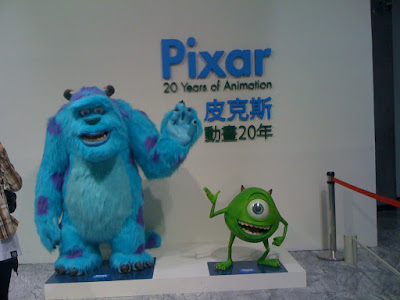 It was fairly crowded on a Wednesday afternoon when I went yesterday, so I can only imagine that the weekend could be nuts. It makes it hard to get up close to see the detail of some of the drawings, but there's hundreds to look at, as well as some multimedia stuff towards the end.

, an installation called Artscape, or my favorite, a zoetrope that brings a spinning disk of still models from Toy Story 2 to animated life in front of your eyes.

Walking through the exhibition, you marvel at how everything is archived and then shipped around the world. I can only imagine all the packing, unpacking, hanging, taking down, and repeat! Props to Elyse Klaidman, who is Pixar's in-house curator and who first came up with the idea for having an in-house gallery in 2000. And of course a chance to buy some Pixar

goodies at the end before you leave the museum. The exhibition is around for another month until November 1st, so catch it before the last week gets crazy crowded!

It's been 14 years since Toy Story, what a great movie, I wish they'd show it here in digital 3d, it's amazing technology! I saw Up and G-Force in digital 3d while in the US, really fantastic.

Looking forward to take my kids here. Will half-day be enough?

I was there on opening weekend, it was insane with the amount of people there. I went because they had special guest speakers that day from Pixar. The talks were great, the exhibition could have more stuff I think. Still, it is still wonderful Taipei got this exhibition here.

I got to see it in new york, I think. Awesome exhibit!

I really liked it. The visual world of The Incredibles and Up are amazing! Could totally imagine putting those large scale color scripts on my house wall as decoration. :D
If you like them too, I found the blog of the guy who's responsible for many of the colorscripts, Lou Romano. It's awesome :D
http://louromano.blogspot.com

mike: yes, half day will be plenty

brian: thanks for commenting!

virginia: i'm sure it was a madhouse opening weekend!

hellcat: cool! it's so cool it travels around the world

greg: thanks for the link! i know, it would have been cool if they sold some of art as posters for people to hang/admire!