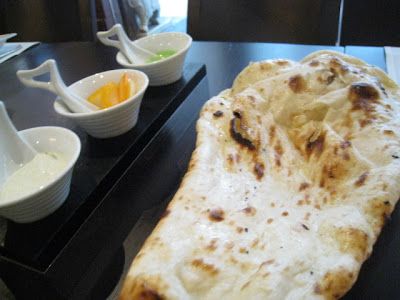 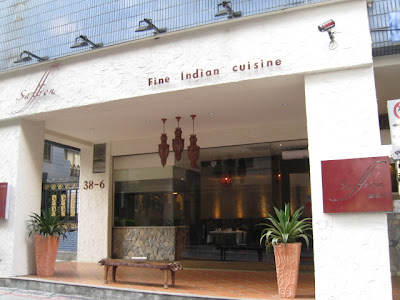 The past week, two of my friends happened to bring up how Saffron is the best Indian food in Taipei. And I agree. Though it's a bit far for me in Tienmu, I've been daydreaming about going back and ordering the Chicken Murgh Mahkmali Tikka (NT$360) and the Lamb Safed Rajasthani Ghost (NT$380). 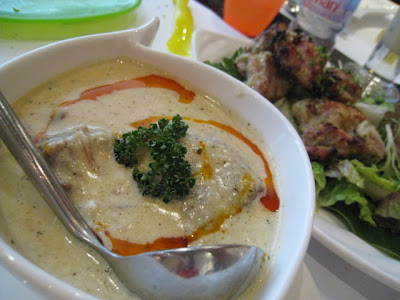 I'm a chicken tikka masala and tandoori chicken kind of girl. Most of the time when I eat at an Indian restaurant, that's what I gravitate towards. That's what I know and like. I don't want it too spicy and I like it a little sweet.

So when the server handed us a menu with a lot of unfamiliar dishes and names and no pictures and recommended some new dishes, I was nervous. 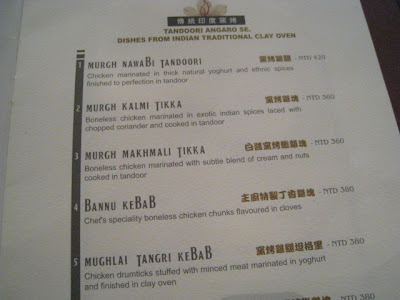 But I'm glad I ordered out of my comfort zone because otherwise I would have never gotten to try some of my new favorites. And although the names don't roll off the tip of my tongue yet, it's okay because I'm more confident that the others dishes on Saffron's menu will be equally satisfying.

Next time, I will probably pick the vegetarian samosas (NT$170) over the methi pakora (NT$170) which is chopped fenugreek, onion and potato and green chili deep fried in chick pea batter. 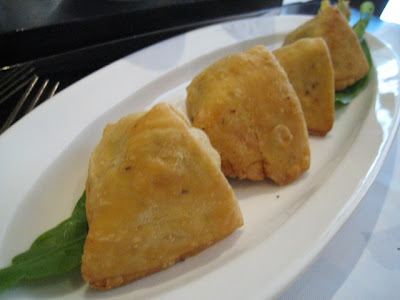 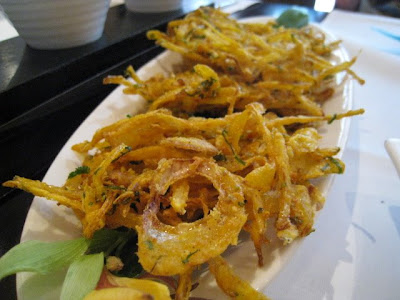 The naan (NT$75) is made to order by the chef in the corner working at the tandoor- it's huge, hot and puffy and good. You can wander over and watch while you wait for your food to come. 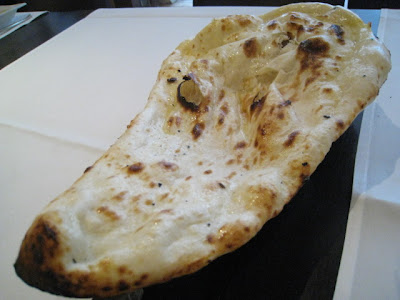 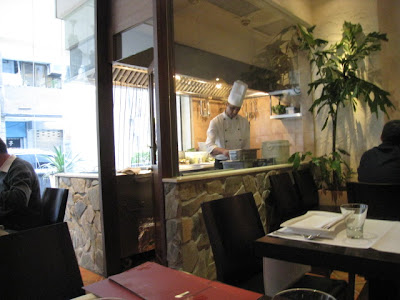 At first glance, the portions for the curries seem small, but the dishes are deep and there's a lot hiding inside. I also like that Saffron's curries are rich without being greasy, and all the flavors were distinct from each other, rather than each curry being indistinguishable from the next as I've experienced at some places.

I enjoyed the sweet eggplant Baigan Bharta (NT$270) which were charcoal flamed aubergines flavored with garlic, coriander and onion... 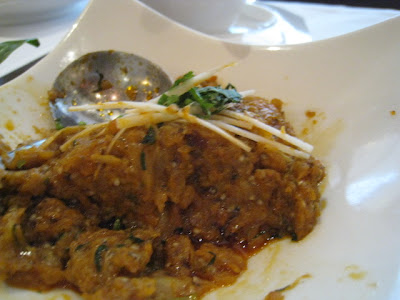 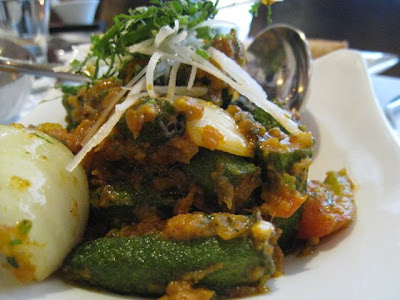 The Murgh Makhmali Tikka (NT$360) had a creamy, nutty taste and the boneless chicken was tender and juicy. 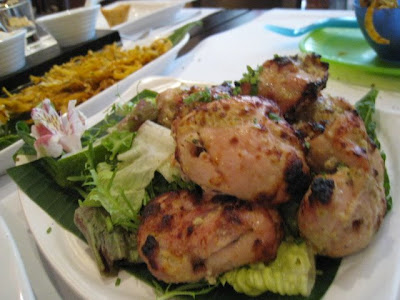 Being one of the newer Indian restaurants in town, it's elegantly decorated with some fun seating in the corners with colorful pillows and areas to lounge. It's right next door to the Spice Shop which I've also heard is good, but it's funny that they are seriously right next door to each other.

Writing up this post, the pictures have my tastebuds salivating over all again. Has anyone been? Where is your favorite Indian restaurant in Taipei?


View hungry in taipei restaurants in a larger map
Posted by joanh at 11:14 AM

Hi, I'm from India and though we mostly eat other cuisines on weekends (i cook Indian on weekdays), we've been to most of the well known Indian restaurants. Saffron and The Spice Shop are on top of our list when we go out to eat Indian cuisine.

Hi!! I am IN LOVE with Saffron's. It is truly an amazing eating experience and one of the best meals I've had in Taiwan. I also highly recommend this place!!! Also, I'm not much of a lamb eater but was highly recommended to try the grilled lamb dish (the name escapes me at the moment) and have been converted! As an aside, I always look to your blog anytime I'm looking for a good place to eat, and as a fellow Angeleno myself who craves a variety of ethinic foods, I REALLY appreciate your takes on what's good and not in Taipei!

jaya: cool! what would you say is different about saffron and spice shop? thanks for commenting!

jcheng21: thank you so much. did you find saffron from my post or before that? i wish it was closer to me so i could eat there more often!

jcheng21: PS- yah, it's been fun discovering more and more diversity in non-chinese restaurants here since it is so accessible in LA. now only if there was good mexican food nearby, right?

We love this restuarunt! Even thought they do not offer high chairs the staff is very friendy with kids.

shelli: thanks for sharing! i'll add that to the kid friendliness. are there nonspicy things that can be ordered?

One of the parents at my workplace recommended it after I was mentioning how much I was craving authentic Indian food in Taipei, and not just Indian food tailored to the tastes of Taiwanese people. Since then, we try to make it out every pay day!! If you're ever interested, you're always more than welcome to join us! As for the authentic Mexican food - AMEN to that!!!

Sorry! just saw your reply... To answer your question- What's different about Saffron and The Spice Shop? I'd say, consistency, class, good food, prompt service, and nice ambiance are the things that set them apart from other Indian restaurants...

Totally agree that Saffron is the best restaurant in Taipei!!!! We also tried the spice shop!!!! This place is in no way an indian Restaurant, the food was far too salty, burnt, dry, and the seating is to crowded!!! We felt like sardines in a tin!!!! Horrendous place!!!! Never will we go again or recommend it!!!

We went to Saffron with a bunch of friends for a farewell dinner and we were amazed! The food is the best Indian food I've had so far (although I have not been to India yet). The Naan is delicous and we kept ordering more. I'm a vegetarian and had some cheese in a tomato-ish sauce which was excellent and what I heard from the others the meat dishes were just as good. I really like the modern and clean setting of the restaurant and although every table was occupied the place didn't feel crowded at all (they only have a few tables, so make sure to reserve a table). The waitress we had was fluent in English and it was the first time I had a proper service in a Taipei restaurant, even for western standards she was doing an extraordinary job!
If it wouldn't be on the other end of Taipei I would def go there more often, but since we don't have a car it's quite a trip to get there from Muzha.

I would give Saffron 7 out of 10, it's pretty good but not great. The most disappointing aspect was the rice which was completely tasteless (we ordered both the plain rice and saffron rice) and they tasted just like the "boil-in-the-bag" rice sold in the UK. For an Indian restaurant to not get the rice right is unacceptable. However the chicken tikka, vegetable pakora and naan were good. We also ordered the fish bengal curry which was pretty good but was let down by the rice.

We go to Saffron around once a week - we have never had a bad meal there, and we are Indian food addicts! I've lived in Taiwan for nine years, and there is no restaurant that comes close to this.

I have had Indian food in 28 countries, including India. Saffron is the best Indian restaurant in Taiwan and is comparable to some of the best I have had pleasure to experience anywhere, outside India of course.

Saffron is one of my favorite restaurants in Taipei, and I've been living here for two years. I went to Spice Shop last month just to compare and for me, hands down Saffron is better. I found that Spice Shop was too heavy handed with the oil and flavors (though if I didn't have Saffron to compare with I probably would have thought it was great). Saffron flavors are just so delicate and delicious that it's hard to beat. My favorite Saffron dish is the butter chicken one. :)

Just went to Saffron. The food was excellent, really nicely marinaded meats made the dishes exceptional. The other side dishes were great, too.

The only flies in the ointment: noisy & a little crowded; and the second curry dish was obviously forgotten, despite having enough staff. We had to tell the waiter to bring it out. By the time it came, we'd already finished everything else. Rather a shame.

Good food, nice location; tries hard. I'd give it an overall grade of A- because of the basic shortcomings. Would I go again? Well, if it was just for a curry... no. I'd go to the Spice Shop... If it was for a date, no... too noisy/no atmosphere... For business or friends, perhaps.

Well, we did go again. In fact, the third time was the best. They 'squeezed' us in and brought all the food quickly! Delightful, we found the curry dishes flavorsome, on target in terms of presentation. Service was much better this time; and we enjoyed ourselves a great deal. I have to update my score to A+! Worth it!

For those that don't want to travel all the way to Tianmu, Saffron has opened a more high end branch beside the Taipei 101- on the 46th floor of the Breeze Nanshan. Amazing views from up top, and the food is just as good as the original Tianmu location but even more refined. You should definitely visit when you get a chance!

This is really an awesome resource that you are contributing to your readers for free. I always love to visit the blogs that provide quality info for free. I appreciate it Thank you, thank you so much! You can visit this blog below too if you wish:
-