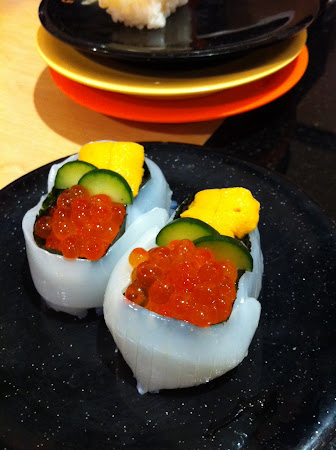 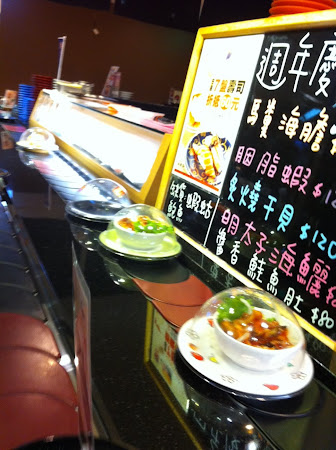 I'd been wanting to check out conveyor belt sushi in Taipei for awhile and while grabbing a quick lunch with a friend before shopping, we settled on this sushi bar in Mitsukoshi food court for lunch. Slightly disappointed to see that there wasn't much sushi circling around, since that's the fun of eating at a place like this, but the chef quickly told us we could order off the menu. 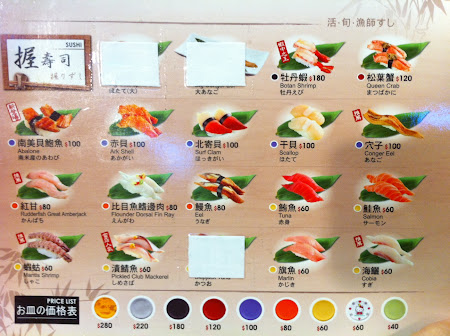 The menu is helpful with pictures and names in English, Chinese and Japanese. I've been slowly learning the names of sashimi that I like, and it's handy to have a reference when the chefs usually use the Chinese names here.

We started out with the bi mu yu or aburi engawa, which is a thin muscle in the dorsal fin of a flounder. They ask if we want it torched and we say yes, since that's how I've usually eaten it at other places and it's quite fatty and slightly chewy, so it tastes better torched. 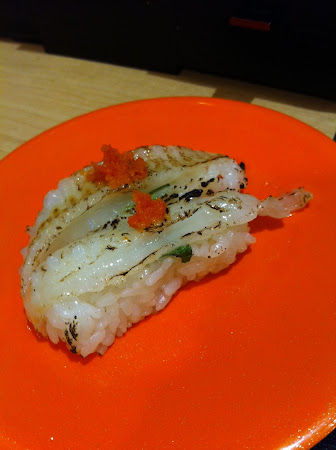 My friend and I end up deciding to share a large sushi platter (NT$420) which the chef puts together.  It's a good assortment of things, with salmon, tuna, amberjack, scallop, cobia, anago, engawa, crab, ikura and uni. The sashimi slices were a decent size and while not the best I've had, not the worst. One thing that definitely separates the great sushi places from the mediocre is the rice. And the rice here is too soft. And the fish was soft, unlike the firmer fresher sashimi in my favorite sushi bars, and the uni was not as sweet. 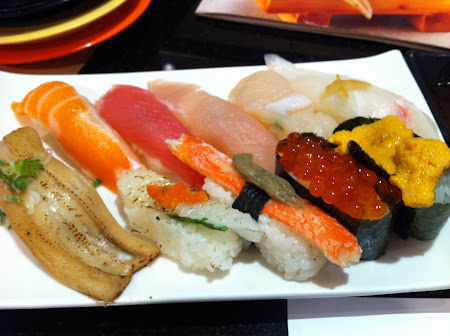 At first I didn't know what this small black spout was at the counter of each seat, but my friend explained it was a personal hot water spout for hot water or tea, if you grabbed one of the tea bags that were set out. You just push your cup against the button and steaming hot water comes out. No need to flag down a busy waitress. 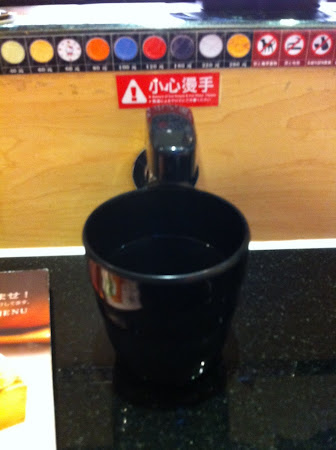 We tried some of the rose rock salt from the conveyor belt. There's also wasabi and ginger circulating. 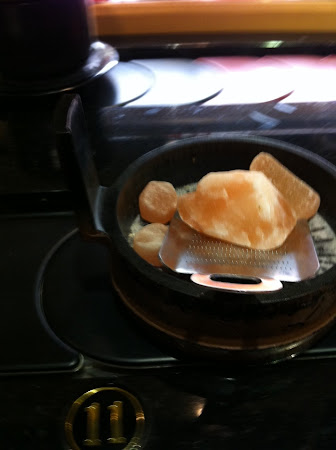 One of our favorite things was this creation we spotted off the menu, ikura and uni wrapped with ika or squid. Salty with the ikura roe popping as I chewed.

Disappointed with this special on the menu- Mentaiko with cobia sounded promising, though watching the chef make it, the mentaiko was more of a mayo paste tubed on top and then he used some butter when he torched it. So the butter flavor totally overwhelmed the natural flavors of the fish and roe. First time I'd ever tasted sushi with butter and I really disliked it. 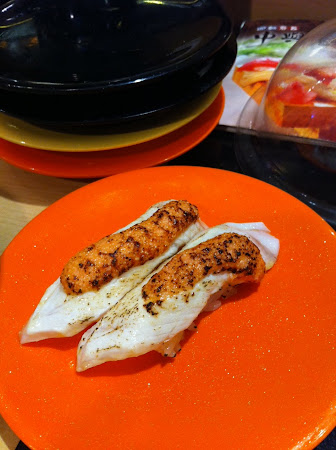 The system for determining the bill at kaiten sushi is pretty genius- calculate the cost by the color and number of empty plates you've stacked up and do the math, or let the waitress do the math. With only two pieces of sushi on each plate, it can stack up pretty high if you're hungry. 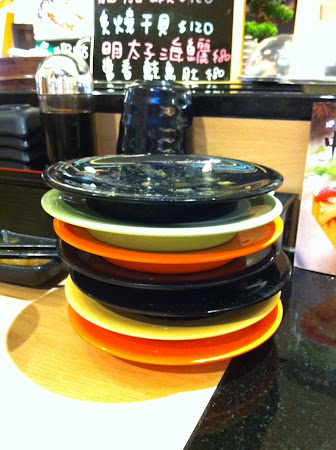 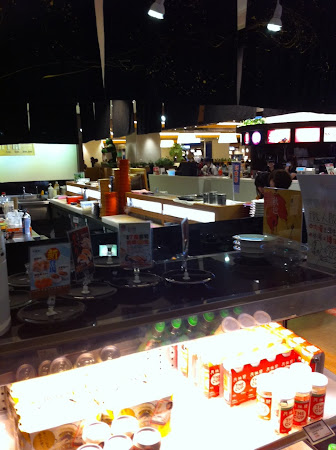 Where is your favorite kaiten sushi conveyor belt place in town? I know a lot of people like Sushi Express since it's what you've been voting for (!), but I'm curious to know if there's other places I must try!
Posted by joanh3 at 12:59 PM

I only go to Sushi Express if I have to due to odd hours or location, it ranges from not very good to awful IMO. Hi Sushi (海壽司) is better but pricier.

I've been to Sushi Express a few times because it came highly recommended on your blog, but each time I've been equally dissappointed with the freshness of the fish and general selection ready on the conveyor belt. Still on the hunt for my favorite sushi conveyor belt location...

i would recommend 丸 （wan) sushi. there's 2 location; both in the breeze centers - fu-xing and zhong xiao. it's a little pricier but definitely worth it. it's not subpar like the other conveyor belt sushi bar.

Delicious photos! Thank you so much for sharing! I took some photos of street food from night market too, hope you like them www.mytaiwanholiday.com

My husband is crazy about sushi and I think that if I can surprise him with a dinner here he will be absolutely happy! What a nice idea!

I looooove sushi! It has such an amazing yet unique taste. I often can't get enough. Sushi is not for everyone, though. i know lots of people who hate the taste or idea of eating such food.