japanese/dessert: i recommend MOCHI on a STICK in XIMENDING 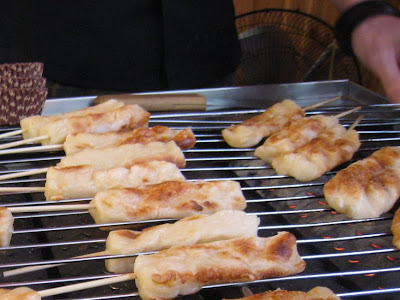 Kid friendliness: sticky and messy, but lots of flavors

Mochi ice cream? Mochi on shaved ice? Mochi on a stick? Traditional mochi desserts? What is your favorite kind of mochi?

For those of you who have never had mochi (or mua ji in Taiwanese or nien gao in Chinese), it's made from a glutinous rice and comes in many different sizes and shapes. It's probably most popularized in the states as mochi ice cream, but I remember growing up eating the brightly colored confections, dusted with white powder on special occasions when my mom would buy a box as a gift in a little shop in Gardena called Sakura-ya. The white ones filled with red bean were and still are my favorite. Or during Chinese New Year, my mom would pan fry brown sweet "nien gao" rice cakes until the outside was crispy and hot, the inside gooey and chewy.

That's what this was sort of like, except on a stick. And covered in sauce. 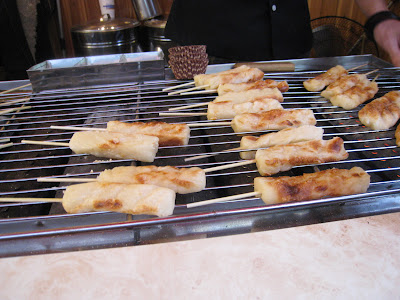 After eating dumplings near Zhongshan Hall, ice cream from Xue Wang and looking for Ah Chung Noodles, (which were a bit too mushy this time around) my friend JL and I passed by this vendor... and who wouldn't stop for mochi on a stick?! 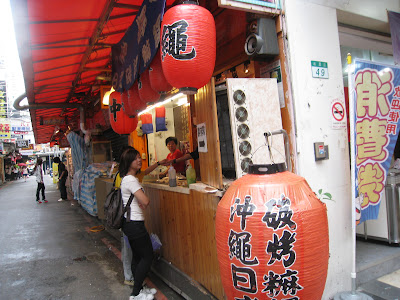 After asking what the flavors were, he recommended cheese or peanut (though I think there's also quite a few other flavors on the board behind him in Chinese). We picked peanut. 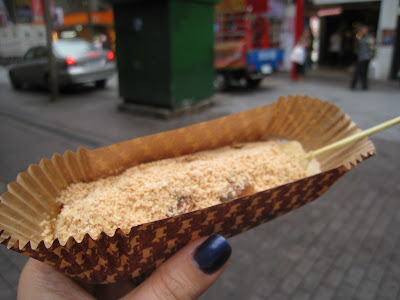 He picked the sticks off the grill, squeezed some white milky sweet sauce on top and poured some ground peanuts on top. At first bite, I wasn't sure if I liked it or not, but with each bite, the flavor grows on you as you are chewing the sticky texture. Kind of like when you grill marshmallows for Smores and get that crispy outside before it burns and inside is gooey. Man, I wonder what mochi Smores would taste like! 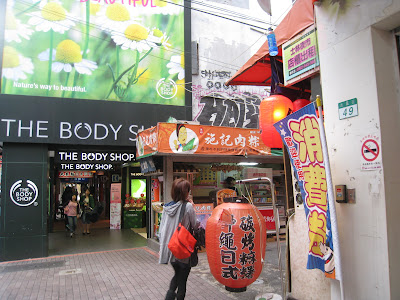 If you are looking to try some of your own, look for the Body Shop, it's right across from it, with bright red lanterns hanging from it.
Posted by joanh at 4:17 PM

Hi, sorry, u dont know me, but i was searching through the internet and found your blog..and WOW you have really done a great food blog! I must applaud.

I am going to Taipei city tomorrow. Is there any recommendation of food around ZHONGSHAN district, NANJING EAST ROAD??

Thank you very much for giving me some ideas as this is my first time to Taipei, im hungry for good food..heehee

hi nee! thanks for the compliment and for reading.. You could give Celestial Peking Duck a try, though it's better suited for a group meal. You could also try dim sum at Brother Hotel or boba milk tea and dim sum at Chun Tsui Tang.

Wow, they are constantly finding more ways to serve mochi. It's amazing. I haven't tried this rendition yet, but this looks good. It reminds me a little of the ones I have seen in Japanese markets, where they put them on a stick and drench it in teriyaki sauce.

Nice! I have seen grilled mochi but not mochi on a stick yet! This looks so good. The crispy looking mochi with the peanut and the sauce must have been a great texture and flavor sensation :).

Hi,
just want to tell you, mochi is different from nien gao...

The peanut is my fav.

Hello, I noticed you said mochi in Chinese is "nian gao". Mochi and nian gao are two different things, but both are made with the same kind of flour. Mochi is like the base of nian gao, which has to be steamed or baked to be called "nian gao". Mochi can be steamed, baked, grilled, fried, filled, and eaten plain. Only when you use brown sugar and steam the mochi is it called nian gao.

Hello, I noticed you said mochi in Chinese is "nian gao". Mochi and nian gao are two different things, but both are made with the same kind of flour. Mochi is like the base of nian gao, which has to be steamed or baked to be called "nian gao". Mochi can be steamed, baked, grilled, fried, filled, and eaten plain. Only when you use brown sugar and steam the mochi is it called nian gao.

Mrana- hi thanks for your comment! I didn't mean to say that mochi and Nian gao are the same thing. I was talking about how my mom would pan fry the steamed Nian gao and the texture reminded me of the mochi that I had that day. I also asked around and some locals will call this type of mochi on a stick "Japanese Nian gao" . So even though Nian gao is made by steaming (and can be made with more than brown sugar, can also be made with red beans etc), it can then be also pan fried, fried, grilled etc