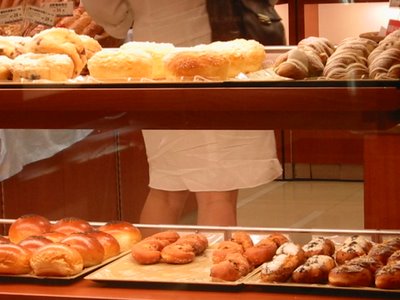 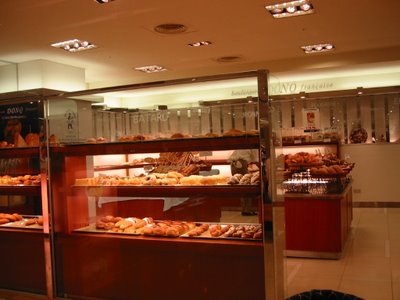 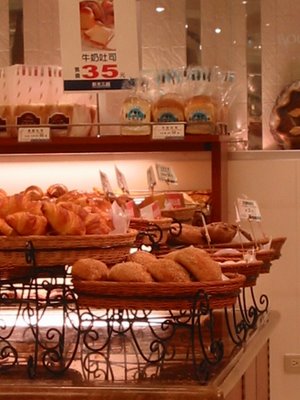 I first discovered Donq when they used to be in A11 wayyy back when. I even took them for granted that they were always going to be there, in the basement next to the supermarket. In addition to the typical baked breads and pastries, Donq had freshly baked mini croissants, in both original flavor and chocolate. CHOCOLATE MINI CROISSANTS! Doesn't that sounds delicious? They even had a taste of the tiniest melted chocolate in the center. Often, you'd even find people milling around and waiting in line for the freshly baked ones, right out of the oven. In the times I waited in line, I found myself cursing the people in front of me, for buying bags and bags of mini-croissants, and hoping that they wouldn't sell out of the chocolate before it was my turn. They the best.

Because one day, I was desparately craving those chocolate croissants, made the trip, prepared to wait in line.. and then I found that Donq was replaced by a new bakery Johan! WHAT???? ANd this discovery wasn't affirmed until I bought a bag of the Johan mini-croissants and found how hopelessly un-Donq they were!

Then recently, I rediscovered them in another building of the sprawling Mitsukoshi malls- apparently they have relocated to the new A4. BUT apparently they mislocated their croissant ovens! They don't make the mini-croissants at this location.. only at some other location that I have no idea where it is.

I suppose I have to work harder at interrogating their employees to find out where this new location is. Their website is only in Japanese and makes no mention of the Taipei stores. Although, they do mention and have a picture of the mini-croissants calling them "mini-one" on the website!

And their breads are good... they just don't have freshly baked chocolate centers and flaky chocolate layers of buttery croissants.

Anyways! I wanted to offer a little advice to anyone who has yet to peruse a bakery in Taiwan- you want to first look for the tongs/trays area and get your own set.. then you can pick and choose to your carb-ilicious delight. Take your filled tray to the counter where they will bag each one individually. Pay. Enjoy! 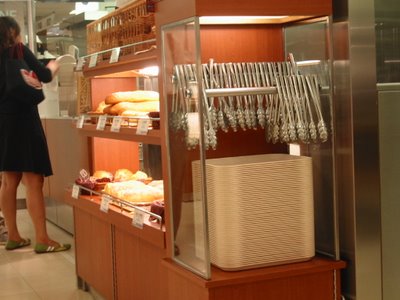 Donq unfortunately has signs only in Chinese, so you will have to either pick based on if it looks good to you, or ask the employees if you want to know what fillings are in certain breads. They have this one fried bread with a curry filling that is quite tasty.. kind of like deep fried doughnut. You might be able to catch them when they have freshly baked breads, such as ones with red bean filling or big sourdough loaves. Just not the mini-croissants, at this location anyways.
Posted by joanh at 10:09 AM

Yeah. I have problems when I'm in Taiwan because I'm not fully literate and look Taiwanese. As you'd expect, not being able to read is just as much of a stigma there as it is here. My food adventures in Taiwan tend to be pretty limited, since I stick to ordering items whose names contain characters I can recognize.

hi chubbypanda! yup, me too... working on my chinese, but definitely get the stuff with the characters i recognize or go with friends who read chinese.. that's why i point out whether or not the place has english as it's a important factor. :)

I know this is an old post but I just discovered Donq this year. Their breads are excellent. I especially like their 'fat' french bread which they slice in half and sell for 50NT. The bread doesn't taste like the typical Taiwanese french breads and actually tastes, well, french. Anyway they also make really good pain au chocolate. I'm sure you've found the other Donq location by now but in case not, it's in the basement of the Mitsukoshi at ZhongShan MRT station.