I didn't know what to expect when I walked in. It looked like many local alley restaurants- with a noodle cooking area outside, and inside a small space with sparse white walls and clean wooden stools and tables. The menu was one of those check-off what you want to order in Chinese pieces of paper- with nothing over NT$100 and nothing in English. Luckily, I was there with a group of friends who could translate for me and place our order with the owner.

Besides our party of 8, there were 1-2 other customers who dropped by while we were eating. Since it seemed that the family owned operation had only 3 people cooking and serving, they were busy getting the food ready, but it didn't seem noticeably slow. I will mention though, that they actually had their baby girl in a crib behind the counter. Since everyone was busy getting our order ready, the baby would cry. We went over to play and cheer up the baby and she was fine again.

Someone started off with a shrimp and green papaya appetizer with shrimp chips. I only tried the shrimp chip since I don't care for papayas, but it looked very fresh and appetizing. 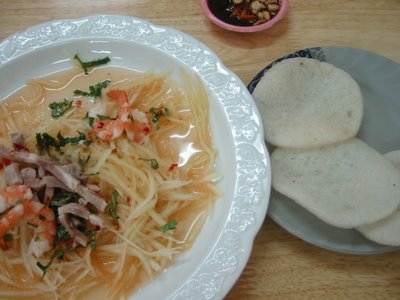 The rice paper spring rolls (NT$60) I had been trying to find for awhile in Taipei, and these hit the spot. While they weren't the most amazing spring rolls I've ever had, they were decent. They didn't skimp on the shrimp and they served each person a little pink plastic plate of hoisin sauce. I must admit, I could have probably eaten a whole dish by myself, since each plate came with 2 rolls, each cut in half. (If you order this, ask for the "raw veggie spring roll" rather than the "cold shrimp roll" like I did- otherwise you'll end up with 2 orders of imperial rolls (NT$50 each) (which I didn't really care for), since cold sounds like 2 in chinese!) 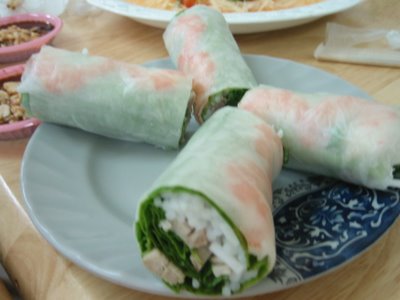 Someone recommended that I get the bbq pork vermicelli salad (NT$80), which came with peanuts, sprouts, cucumber and grated carrots, and predrenched with the sweet and spicy fish sauce. The combination of the slippery pho with the crunchy veggies feels so weird in my mouth, but in a really good way. But what is totally worth mentioning is the bbq pork. It was AMAZING. Perfectly grilled, the marinade had a sweet flavor with a kick of spice that complimented the tenderness of the pork. Better than bbq pork vermicelli I'd had in LA! I even ordered another side order of just the pork to share. 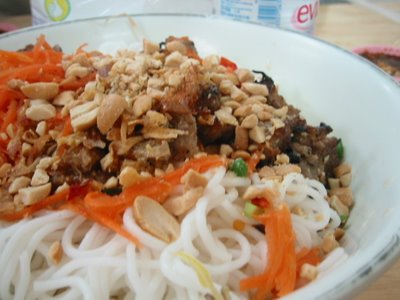 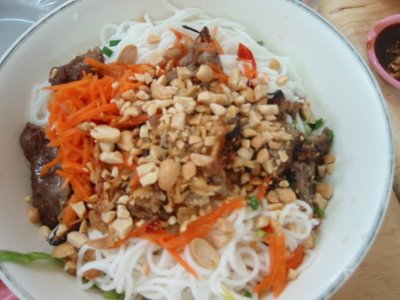 YAY! Pho!! The pho with beef (NT$80) was good- it was a big bowl filled with noodles, soup and beef. A hundred times better than the faux pho I had at Eslite's food court's Pho . And here it's actually pho and not fat rice noodles. The broth was had enough salt, fresh basil, cilantro and onions, beef, lime and other mysterious flavors that make pho broth what it is. The pho was chewy and not soggy, and I was so happy that I had finally found a place to decent pho in Taipei. 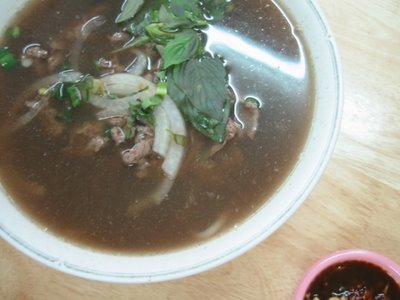 Interestingly enough, most of the locals we ate with ordered noodles instead of pho. Coming with the same beef broth, but instead of rice noodles it comes with egg noodles. I didn't have a taste, but I thought it was kind of strange to eat pho without the pho. Maybe next time I will ask if that's a local accomodation or if that's truly a Vietnamese dish. 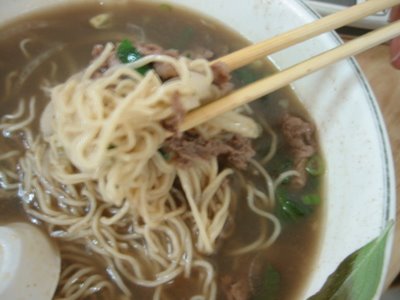 Pho usually doesn't photograph well with its murky beef broth based soup, but definitely don't let that discourage you from trying it if you've never had it before. With both the pho and the noodle, you can get beef, rare beef, beef ball, chicken, pork or combo. You can also get just meat and soup, without noodles.

If you have been searching for Vietnamese food in Taipei like I have, you should find a friend who speaks Chinese to come find this place with you. You can even treat them for helping you order- as it's such a bargain. Lunch for the 8 of us totalled NT$1050 or about US $31 which included 8 bowls of noodles, 4 orders of spring rolls, 1 side of bbq pork, 1 green papaya and shrimp appetizer, which was about NT$131 or about US$4 a person. Being used to pho being almost US$6-7 a person now, I was pleasantly surprised that we could find such a bargain that tasted good here and I think the owners are actually Vietnamese! Until I hear about or find another Vietnamese place that is better, I will definitely be going back.
Posted by joanh at 11:33 PM

Thanks! Have you been to Taipei recently? Let me know what you think if you have been to any of these places!

Sadly enough, not for ever ten years. That's why I like your blog so much. It gives me little tastes of the motherland that will last me until I can scrape together enough time and money to go again.

Hello! Is it possible for you to write the addresses in Chinese too? Cos it's kinda difficult to figure out the Chinese street names given that the Chinese has a lot of words that share the same sound. I would really like to visit the places you have reviewed!!

chubbypanda: well definitely let me know if you ever make it out here again.

olivia: Thanks for visiting! That's why I include the phone numbers so you can call and get the address and directions. Also, my computer doesn't type in Chinese. Plus it's always better to call since smaller places like these- are closed down and other restaurants reopen in the same location.

hey,
i happen to live not too far from this place and decided to try it out. the spring rolls were a bit too salty, but the pho was pretty good. the noodles were not quite what i expected, as they weren't the white thin noodles. oh well, but overall not bad and inexpensive.

have you tried pho hoa in taipei? i doubt it's part of the chain, but in the past they used the same logo. now, they've renovated. it's located in an alley off sogo zhongxiao (from sogo zhongxiao branch, go east towards sasa, and turn left at daan rd., turn right at bossini, and the restaurant is on your left after a block). they have english on your menu. try the combination pho. service is inconsistent, so make sure they give you a bowl of "you2 tiao2" to put into your pho!

joshua: thanks for the tip! pho hoa has been mentioned a few times to me lately- i will definitely have to check it out. when you went to delicacies- they do have the thin white noodles, but you have to order them since some of the locals opt for the egg noodles.