For those of you who have yet to hear of Mister Donut, it's a chain donut store from Japan (though I heard somewhere it actually originated in the US), which had a crazy debut in Taiwan, where the lines to get a box of donuts would take up to four hours. Yup, you heard that right- people waited up to FOUR HOURS for ONE BOX of donuts. 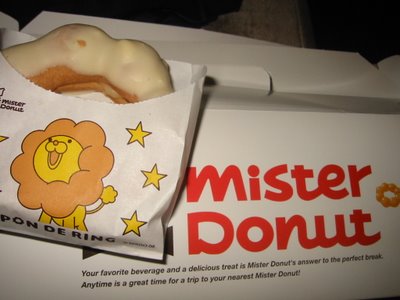 Crazy right? It even sprouted up a business where students would sell their "waiting services"- you ordered your donuts online through them and they added a fee of NT$10 or US30cents or so per donut and they studied or text messaged or whatever while they waited in line for you. Each donut is about NT$30 or so, so it was a hefty 30 cents or 30 percent fee per donut. 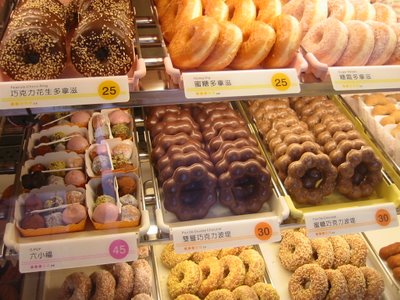 But now, since they've expanded, you can usually get your donuts within 5 minutes, though sometimes I see mini-lines sprout up.

Is it worth the wait?

Well, first off, the donuts aren't like your typical American donuts, at least to my tastebuds. 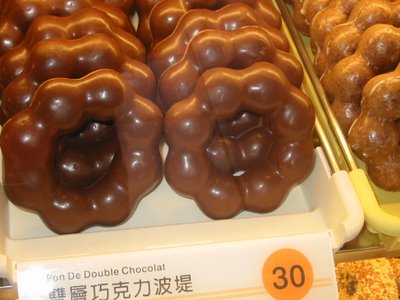 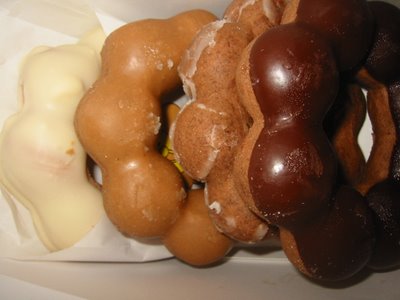 The most popular "pon de ring" donut is made from a gluten-based flour which gives the donut a slightly chewy texture, kind of like if you combined mochi and a donut together. It's not very sweet and quite dense. Sort of the opposite of Krispy Kremes I suppose- which are very sweet and light- which I end up craving whenever I see a Mr. Donut.

While Mister Donut has other less chewy donuts, overall, I think their donuts are so-so. They also have old fashioned, cruellers, cake, sugar, jelly and eclair donuts, but I find them either too dense or bland or too sweet, depending on the type of donut and frosting. While it's good for a quick snack, it's pricey for a donut- US$1, with no discount if you buy a full dozen. 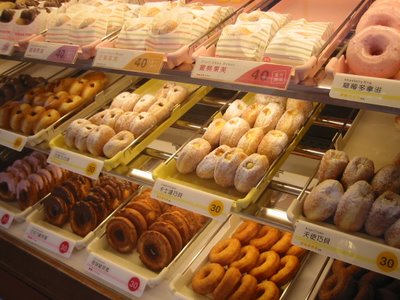 I wasn't sure how to classify Mr. Donut- is it a dessert? Is it breakfast? Is it a bakery? Most people don't really eat donuts for breakfast here, like you would Dunkin Donuts, so I just put it under bakery. The pristine counters and rows of donuts behind the glass makes it fun as you point and pick out your donuts and you watch them carefully pack them into the box. But if you click around the website, you can watch videos or download desktop images of the pon de ring lion. I guess the disappointing thing, is that they don't taste as good as they look. 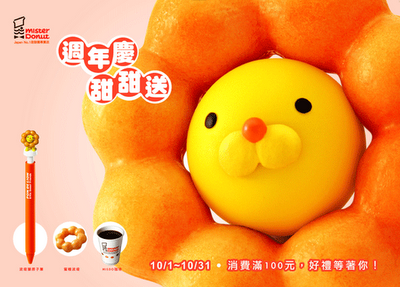 This month, they gave away little stickers with purchase, so if you matched two of the same prize, you could win either a free donut, cup of coffee or Mister Donut lion pen. While the mascot is super cute, it seems to be used pretty sparingly in the decor of the store. 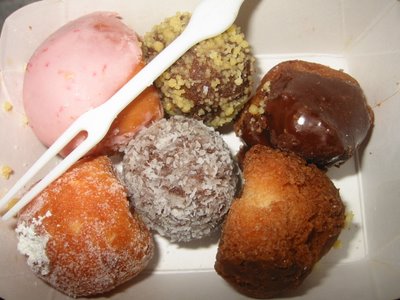 More recently, they started having donut holes, which I was very excited about. But I found them to be dry and dense. I miss those melt-in-your-mouth donut holes from Dunkin Donuts (which strangely enough, is all over Korea)!

The Mister Donuts are pretty much the only donut chain in Taipei, until someone decides to make lots of money by bringing Krispy Kremes here. That would be so awesome! So if you are craving donuts, try the pon de ring donut, but be prepared for the chewiness! If you are craving Krispy Kremes, well, ask someone to bring some back for you.
Posted by joanh at 5:15 PM

That lion is adorable.

The problem with a lot of Japanese, Taiwanese, and even Chinese sweet goods is that they're tailored to palates used to lighter flavors and more textures. So it's only natural that we American born/raised Asians find them a bit bland.

yeah i find that to be true with a lot of the cakes here as well... if you are looking for a rich chocolate cake, you have to know where to go, otherwise you'll get a light angel cake-style chocolate cake. and what's the point of eating chocolate cake if it's not fudgy??

nice site. it's only been a couple of months since i've moved to taipei (first time living here long-term), so i'm glad to find some solid restaurant recs.

about mr. donut, though, i have to disagree. my wife and i checked it out the branch in nyny last night, and though we found the donuts overpriced we liked them quite a bit. i liked the chewy texture, liked the fact that you could pull each ball off one by one like some sort of candy necklace. and, for my tastes, i thought the sweetness was just right. not krispy kreme, of course, but a different genre of donut altogher. we tried one of the custard donuts, too, which i also enjoyed.

thought the coffee was icky, though. anyhow - great site; keep up the good work.

hi abstract,
thanks for commenting! hope you will leave your opinion regarding other places in Taipei you have tried. I'm glad you like Mr. Donut- it's not bad, I just don't find myself craving it like I would a Krispy Kreme. hehe. The only donut I like there is the ring, and yes, it's fun to pull it apart.

Just wanted to let you know that there is a Dunkin' Donuts now in Taipei (near Nanjing and JianGuo). They have tasty donut holes!

shannon: wow, really??? that's VERY exciting.. i will have to check it out when I'm back... now if only the krispy kreme gods would listen to us! hahaha

When I saw this post in my feeder I was going to make the comment about Dunkin' Donuts, but Shannon beat me to it!

I've tried the DD's line of donuts and they're just like at home. And the coffee is just like the DD coffee they serve on the east coast. It's actually what I prefer to drink to Starbuck's.

You can also get the coffee "box" which is this huge box of brewed coffee (it has a spout) to carry with the big box of donuts you'll be buying!

As to Mr. Donuts, I was first introduced to them in Shanghai back in 2004. I liked them there, but what I really enjoyed was the few I had in Japan in summer of 2005. The flavors and textures were a bit different than the ones they produce here in taipei...they were not as sweet and chewy, a bit firmer. But that doesn't deter me from getting a Mr. Donut or two every so often in taipei.

Mr. Donut was originally an american chain from the late 50's early 60's that was bought out by Dunkin Donuts. All the Mister Donut franchises were ordered to change it's name after the sale.

The asian franchising rights were sold to a Japanese company sometime in the early 80s, restructured/reinvented in Japan and evenutally became incredibly popular in Asia.

The funny thing is that the Mister Donut chain may come back to the US, but I think there are a lot of legal branding/franchising issues that have to be ironed out. I keep hearing rumors of openings in LA. But it could be total hogwash.

I loved these pon de rings when I was visiting Taipei last week. In Shilin Ye-Si area, there's a Mister Donut AND a dunkin donus on the same street. Both carry the same mochi ring donuts but slight edge goes Mr Donut. In contrast to the author, I actually think the krispy kremes back here in the US are way way too sweet, grossly oversweet. I wish they would open up a mister donut here in LA/OC !!

rose: thanks for the comment and the info! i think it could be possible that they would open a mr. donut's in LA.. there's quite a few Beard Papa cream puffs there now!

debbie: hi! welcome to the blog...the pon de ring is my favorite from the Mr. Donut donuts too.. I will be the first to tell anyone that I have a sweet tooth! I wouldn't eat a ton of KK's.. but sometimes you just want one, hot off the assembly line!

Mister Donut here in the Philippines is far affordable than in Taiwan where their twisters are selling at approximately NT$12 a piece. They also offer belgian chocolate covered donuts although a bit more pricey...

The far more expensive gourmet donuts are Krispy Kreme and Go Nuts Donuts but since citizens here are more sting, they often opt for the inexpensive ones.

tintin: hi! yeah.. that sounds a lot more affordable.. so lucky to have krispy kreme!! i wish they would have one in taipei. which chain is the most popular in the phillipines?

Both Mr. Donut & Dunkin Donuts are popular with the masses (with emphasis)... Mr. Donut can be often be seen with tie ups stores and fast food such as 7-11 & KFC. Besides that, they have outlets in various malls situated nationwide.

Same goes for Dunkin Donut, which is more visible than Mr. Donut in terms of TVC and outlets. They have expanded their menus besides donuts to gourmet coffees and sandwiches but people still often went for their donuts and munchkins.

For the upper class (the elite ones), they go for Krispy Kreme which opened it's 1st store two years ago situated in more of a high-end mall where all the rich and famous would hang and shopped. Now, based on the website, it has already opened 6 stores in the Metro Manila. Still, the locations of the store still caters more of the upper middle class to the super rich.

But still donuts are all the same, I would still prefer the regular sugar sprinkled donuts that our local bakery make.

For the record, there's a Dunkin' Donuts in Miramar mall these days.

It would be quite ironic that Mister Donut makes it way back into America after it has been modified by the asians.

Why can't we have Pon De Ring here in the Philippines?!

My wife and I ate at one of these places the other day. Your description of the doughnuts was spot on. What I was more impressed with was the depth of selection when it came to their vinegar fruit drinks (which I had never had before but was surprised and enjoyed it).