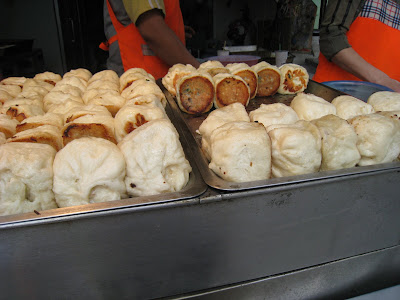 Kid friendliness: take away only. kids may like to eat, but very hot at first.

Tsui Jian Bao or Sheng Jian Bao or pan fried dumplings were my favorite thing to eat when I first came back to Taipei for a visit in 1997 after not having been here for over 13 years. After all, NT$10 for 1 seemed like such a bargain for a fresh steaming hot filling bun that was definitely a rarity in the states, much less LA.

The best tsui jian bao place that I've eaten at is probably still at Shih Lin Night market , but I don't go to the night market as much these days (getting old. ha ha), so I had to give it a try when I saw the crowded stand on the busy corner of Xin Yi and Yen Ji Jie. (The little cart near Dun Hua Eslite is not bad either).

There were three separate stands (Heard afterwards from some people that only 1 is good). Have any of you eaten at all three and know which one is the best? 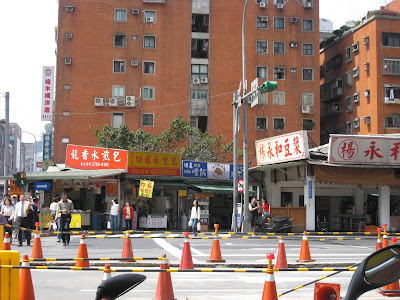 This particular one (the one on the farthest left, red sign) offers 6 different fillings for the bao (NT$12) and spring onion cake (NT$35 for 1/2). They also have a squash variety (which wasn't available that day). 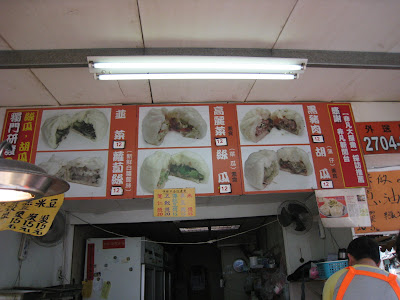 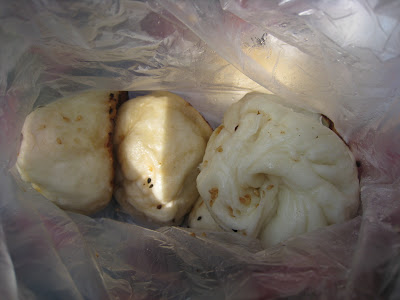 I got three different kinds- one with cabbage, one with pork and one with jiou tsai or chives. My favorite was the pork, then chives- I didn't really like the cabbage one. 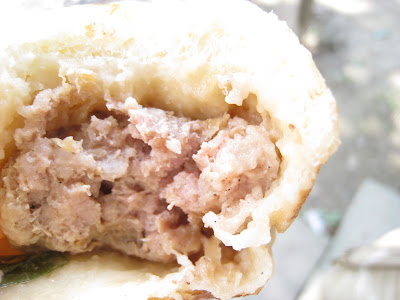 Overall, the buns were okay. Don't know if they sat too long in the plastic bag, but the the bottoms were not as crispy as I'd like and the dough overall was too thick, especially at the top. 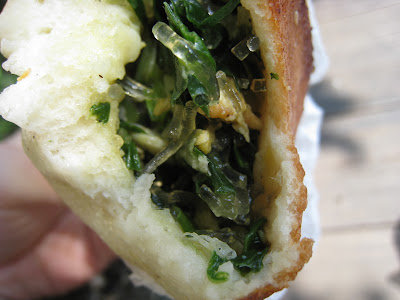 The spring onion pancake, on the other hand, was really good. Thin, crispy and flaky, and not greasy at all. 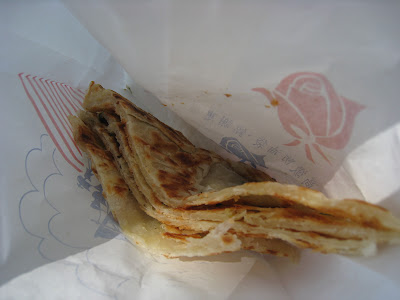 This day was SO HOT- a rarity in the week of grayness- and I bought a drink from 7-11 which I thought was lemonade-ish, but turned out to be ai-yu is, which is more like a jelly consistency. My friend later told me that the bottle says that it's "filling like a meal" or something like that. 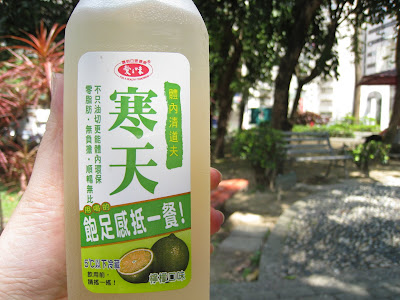 It was lemon-limey, but would have been better if it had some juice in it too. Ah well. 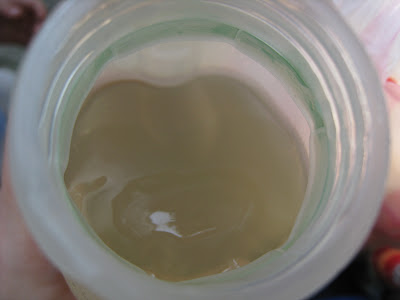 My favorite shway jen bao place is at Tonghua nightmarket: it's at the very end/beginning where the market meets Keelung Road. Best ones I've tried! And the folks there are really friendly. They are a little smaller than most of the other ones I've seen, but they are NT$40 for 5.
I've also tried the pork shway jen bao at the corner of Xinyi and Guangfu S. Rd - I didn't really like the taste too much. There's a new shway jen bao stand on Heping Road, across the street from the National Taipei University of Education entrance, but I haven't tried them yet.
Thanks for the cool posts!

zach- thanks so much! i'll definitely have to try the ones at Tonghua night market. usually the tsui jian baos at the night market are better since there's higher turnover.. the ones at this corner have usually been sitting around.

Where is this place? Can't find it on google maps. Thanks!

anonymous- hi!! totally forgot about this post (and when I was not so knowledgeable about Taipei.. the intersection is actually at Xinyi and GuangFu. The shops have gone under slight renovation so looks different than this photo! I'll try to post a new pic!

It's not on Google maps, and doesn't appear in any searches, but us right next to a breakfast restaurant/counter that also does a flaky sesame pastry with egg inside that is lovely.