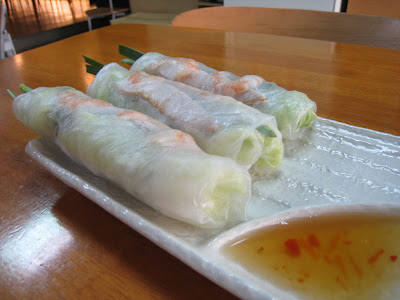 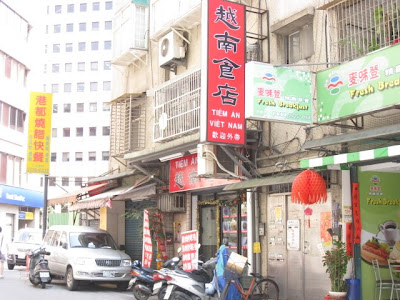 I passed by this place about a month ago and then ended up going back twice. Once for take out and once for sit down. I've been seeing more and more hole in the wall type Vietnamese places, all in little alleys with hard to find locations if you haven't been before. Location-wise, it's not too far from Omelete to Go or the alleys across from the Grand Hyatt hotel and it's across from a Korean restaurant I also have my eye on.

You'll know you're there when you see red and black sign that simply says "Vietnamese Restaurant" in Chinese (or Yue Nan Fan Dien) and spot the front window filled with lots of blown up pictures of their spring/summer rolls, pho, rice dishes and sandwiches. This one is worth searching out if you've been craving Vietnamese because its mom and pop styled food offers a varied menu, friendly and efficient service and cheap eats in a clean, enclosed setting quickly fills up during lunch with lots of business types. 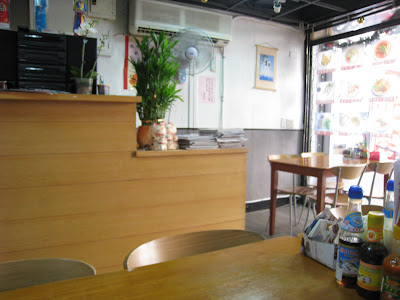 Plus they gots the sauces! Fish sauce, hoisin sauce and chili sauce. 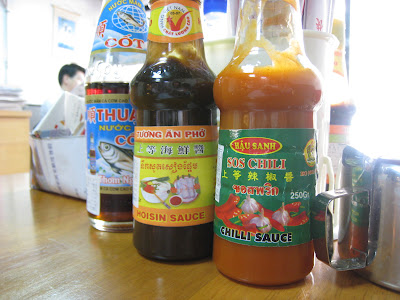 Okay.. my first visit I was in a bit of rush and ordered pho (NT$80) and summer rolls (NT$50) to go. I had an upset stomach a few days before, so the owner recommended chicken pho instead of the rare beef. The smell of the broth in the car was a bit fishy and overwhelming on the way home, but after pouring it all in the bowl and tasting it, it was fine. They put in all the sliced chili peppers and cilantro and I didn't spot any fresh basil or lime or hoisin on the side (though I didn't request any either). 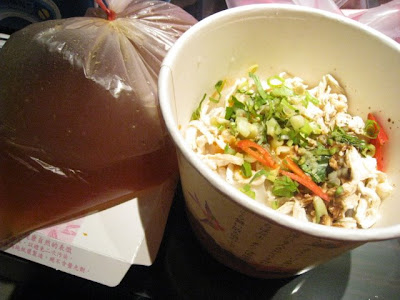 I don't remember the pho being this fat/wide in the states.. so I don't know if it's an adjustment for Taiwanese customers or US customers.. how is it really in Vietnam? I think I still like the noodles on the thin side. 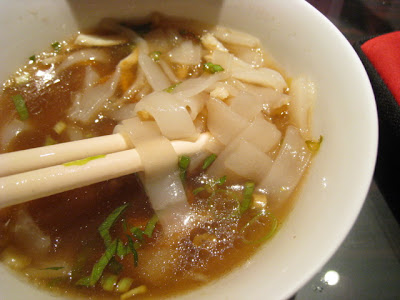 The summer rolls were also decent- 3 for NT$50- on the smallish medium size. 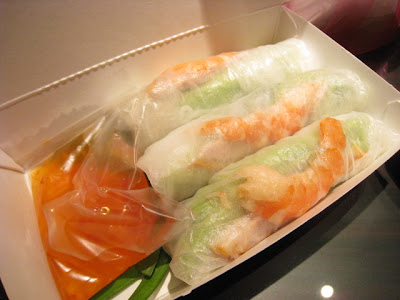 Waiting for my food, it was funny seeing an older Taiwanese couple trying out a bowl of pho and a pork plate and commenting about it while they were sharing. The owner/guy said that they had been open for about 8 months or so and business was best during lunch.

The second time I went for lunch, they had a menu in English (instead of the picture menu that they have with Chinese and Vietnamese).. I used both to try and figure out what I wanted and decided to try the Vietnamese pork plate(NT$70) since it was too hot that day to eat pho. I also wanted to try the spring rolls (NT$50) along with the summer rolls (NT$50).

The spring rolls were piping hot and stuffed with ground pork and veggies. I wasn't sure what they were wrapped in, but it was very crispy and bite sized with lettuce on the side to wrap them in. 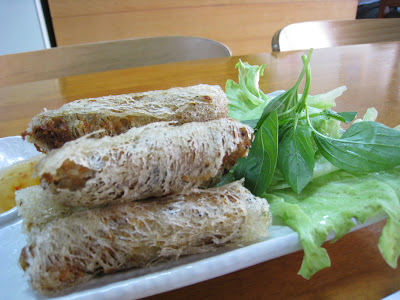 The Vietnamese pork dish came with homemade side veggies- I liked the bamboo but didn't really care for the lukewarm tomato egg and greens. The pork was flavorful, but had a weird texture on the surface on the meat- hard to describe, that made it sort of rough/grassy to eat? I don't know if the marinade could do that or the way they grill it? It seemed to be a popular dish, or maybe the other customers who followed me saw it and wanted to try it. On the other hand, the rice was really good. You know sometimes rice is over or undercooked? This was perfectly cooked rice. 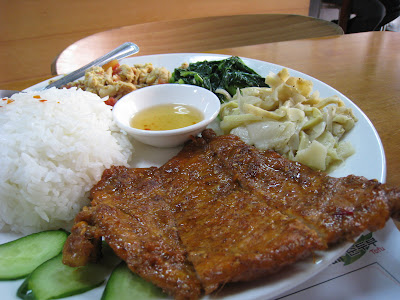 Spotted in the corner: Made in Vietnam, that's a good sign right? :) 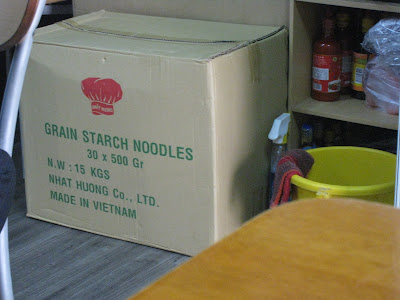 Seriously, the prices here are so low, you could just got a bowl of pho or rice plate for under NT$100 and be full, but you should try the rolls too. (My rice plate plus 2 dishes of rolls was under NT$200 since they charged a 10% service fee or NT$15 (Or 50 cents), so I had to let them keep the NT$20 change to which I think they were pleasantly surprised). I also want to come back and try the curry or the sandwiches which they also have. Plus gotta keep them in business especially it's much better than the faux chain Pho (which is now closed at Warner/Vie Show Village, but still spotted at Breeze Taipei Main Station and Eslite) and since my previous tasty Vietnamese hole in the wall discovery is apparently closed.
Posted by joanh at 12:48 PM

hmm i'll definitely have to try this! and i agree... definitely don't like that chain Pho. Kinda glad that it's closed. My grandmother took me to an amazing hole-in-the-wall vietnamese place in a little alley by the Sogo on zhongxiao E. road... but i can't remember for the life of me where it is or what it's called. when i get back i'll try to find it and let you know.

hello beebs: cool! let me know if you remember which alley- to the left or the right or behind it. :)

A nice Vientnamese restaurant? I won't miss this one. I used to go to Madame Jell's vientnamese Cuisine of Gongguan when I lived in Yunghei. This one is close to the office with good price? Cool...

is this section 1 of KeeLong Rd?

Can anyone point me to the best hole-in-the-wall Vietnamese Restaurant in Taipei? i heard there are quite a number of those in Gongguan. I will be visiting Taipei in a few weeks time, and i hope to eat the best Vietnamese cuisine in town.