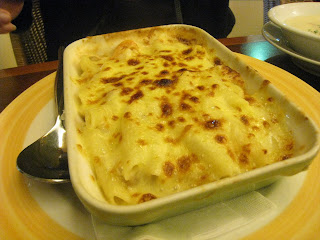 See, I told you I was catching up on old posts... but three posts in a row with ZERO comments. I'm so sad. :(

If you want to try the epitome of localized "Italian" food for Taipei, this is it. We all know that many many, let me repeat, restaurants here adjust their food to the Taiwanese tastes, but some places (many of them the local pasta places) were never meant to be for people other than the locals. From the typos to the flavors to the baked pastas/rice dishes, I had to just go with the flow that night. I have to say though that the service was very friendly and it was pretty full of Taiwanese families enjoying the night out.

First off, the name of the place is "Giorgio's." Or is it? On the sign outside, it is. But on the menus and business cards, it's "Gerge's." 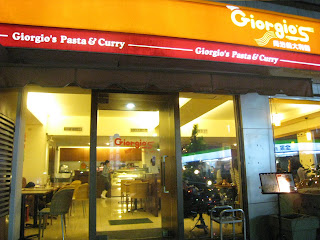 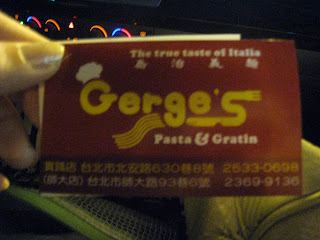 What the heck? They can't even get the name of the place spelled right? Or maybe someone took over the store and renamed it, but was too cheap to redo the sign outside. Note the clues: on the outside sign, it's pasta and curry, on the business card, it says, pasta and gratins. Who knows, it makes me laugh out loud. 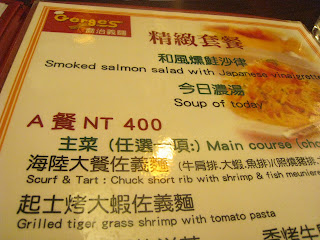 While I didn't get the fancier set menu, we got pasta/gratins to which you could turn into a set menu which included a small salad and the typical mystery slightly watery chowder and choice of tea/coffee for an additional charge. The rest of menu is in English and Chinese, filled with mostly pastas, a few gratins and soups/salads. 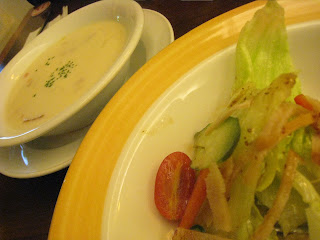 Third, my spaghetti with pork chop and tomato meat sauce (NT$120) was so strange tasting I couldn't get past a few bites. I watched everyone eat up their baked gratins and I was sad that I happened to feel like red sauce that day. I don't know what it was about it- it was a bit too acidic or had some weird spice in it? It wasn't sweet like bolognese and it wasn't salty like plain meat sauce. The pork was okay, but tasted like sweeter pork chop that you might find on rice, so the two flavors didn't really match at all. But after mentioning it to the servers, they quickly took it away and offered to replace it with something else of my choice, free of charge. 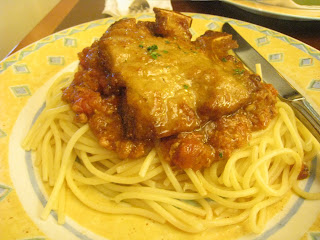 I got a baked gratin with penne, chicken and mushroom (first picture) and I liked it... it was cheesy and hot, the pasta with cream sauce was probably put in there just before they topped it with cheese and baked it, but it was better than a frozen dinner and it was a LOT better than the meat sauce. Overall, I wouldn't go there again on my own, but if my relatives said, hey, let's go back to that Italian place, I would know that I'm not really getting food, but I'd go along for the ride and stick to the gratins.

The only passable asian/italian fusion place in Taipei is Capricciosa on 復興北路. Italian/Japanese I believe. You're best off going full-out authentic Italian otherwise.

hahaha you crack me up! thanks a lot for all the blogs.