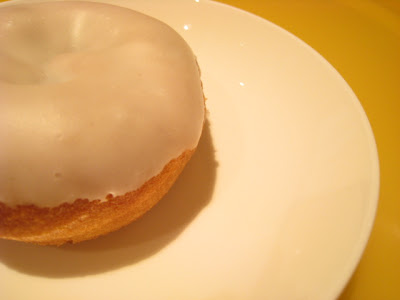 Who would have thought the perfect American style cake donut would be at Costco? I spotted it on my trip today and couldn't resist- after all- you get 8 for NT$119 which is basically the price of 4 Mr. Donut donuts.

The tray comes with half chocolate donuts and half plain (4 each)- they are a good size with vanilla frosting.

I practically inhaled mine- it was moist, sweet and dangerous! It's so simple, yet so satisfying especially in contrast to the dry bricks of cake-style donuts that I've had at Mr. Donut or Dunkin Donuts. It was dense, but not heavy. 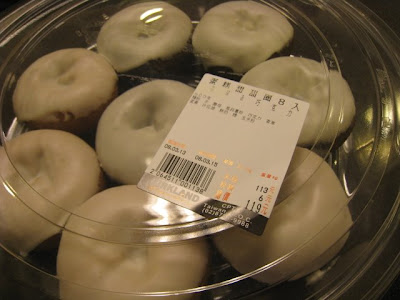 I don't know if it's a staple like their muffins, croissants, cheesecakes, or seasonal like their pumpkin pies, but I was happy to find it! I totally love their cheesecake and birthday cakes too. They also have freshly made cream puffs and cookies, which I haven't tried here, not to mention their churros and frozen yogurt in the food court.

Oh, and good beef hotdogs (not like the nasty hot dogs at Ikea).

If only they made lemon meringue pies, then Costco would be even more awesome.

What's your favorite thing from Costco or what do you wish Costco Taipei would import in?
Posted by joanh at 10:02 PM

We like their roasted whole chickens, Kirkland coffee beans, & fresh ground hamburger to mention a few. We only wish they would bring back a couple of cereals that have disappeared - Honey Bunches of Oats and Post Raisin Bran (get rid of the Kirkland brand!)

I happened to read your donut review the morning before our "family" trip to Costco. And it got me in trouble. I got the donuts and enjoyed them--just like a good American donut. The problem was it was the wife's and my second day in Taiwan and the donuts filled me up too much to enjoy the Taiwanese food waiting at home. I got a scolding from the wife...

So it's something more for an expat to enjoy.

Sorry jb, but the roasted chicken was a big dissappoitment compared to the Foster Farms chicken in the California Costcos. The Foster Farm chickens are very juicy and tender, with a good seasoning. When my mother-in-law visited a couple of years back, she insisted on several visits to Costco because she enjoyed the chicken so much. I was so hoping that when we first ventured to Costco last year, we would bring home that delicious chicken. At least they had the big bags of Cheetos she loves.

cakespy: they were good the first few days! your site is so cute! thanks for visiting.

jb: i feel like their chickens are not the same as in the states, but still good when you feel like roasted chicken. supposedly you can leave your requests with their management.

pterrell: glad you enjoyed them, but sorry you got in trouble!!! :)

Believe it or not, their cheese pizza is really good if you like a regular crust, not the thin, crispy style like at Alleycats. Very generous amount of cheese.

I also love their hot dogs. I get at least one every time I go there.