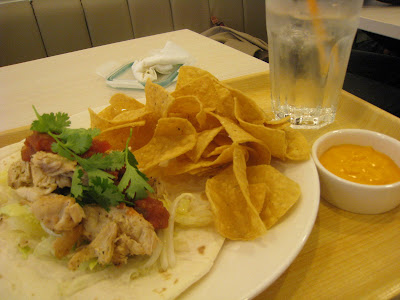 Kid friendliness: like a fast food place. no high chairs. stairs leading downstairs (where the restrooms are) so slightly hazardous for running toddlers

Don't confuse this Good Day with the other G'Day cafe, which I think I heard also had some Mexican food offerings (but haven't been). Picked as a lunch location by a friend, it was relatively empty during lunchtime except for us- it's a clean, bright fast food setting where you order over the counter and pay, but the food is made to order so it's not particularly fast. We had about five people and everything came out separately so some people were eating ahead of others. The menu is above the counter in English and Chinese although they told us (when asked) that the pictures are only for reference and not of _their_ actual food. The menu includes burgers, mexican food, pizzas, salads and other snack type fare. 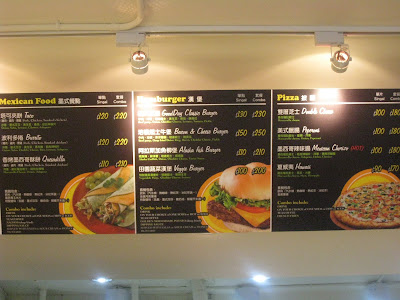 On my quest to try every Mexican food (or Mexican-ish with a Taiwanese take) in Taipei, I ordered the chicken taco combo (NT$220). I had a side chips, drink and a sauce, for which I chose nacho cheese. I was going to get the guacamole, but it was not an option as a freebie. I asked if it was made in house with Haas/American avocados and they said no, so I opted against paying for it. The taco was harmless enough though very very far from authentic- the strangest thing was that it had a double layer of flour tortilla which sandwiched a layer of cheese. Pretty pricey for one taco- unless it was an awesome taco, and it wasn't. 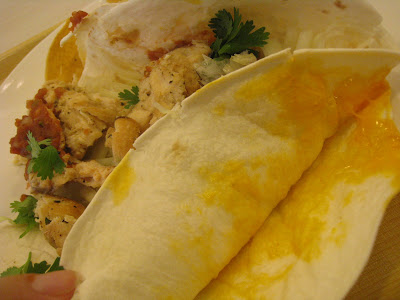 The cheese sauce actually made for tasty dipping for my store-bought chips, though not enough. Nacho cheese, believe it or not, is harder to find than you'd think in Taipei- most of the places when I order nachos give us melted cheddar or mozz or mysterious cheese atop of chips instead of the movie theater style nacho cheese that is more melty and suitable for dipping. Mmmm, that makes me want to request that some Tostitos con queso dip get sent back in my next care package (even though it's something I never eat in LA.. don't you think it's weird the things and places you eat at in Taipei that you NEVER eat in the states?)

I didn't get to try the burger, but it actually looked pretty decent (bacon cheeseburger with onion rings) with fries. Lots of the local places here have been pretty capable of putting out good burgers. 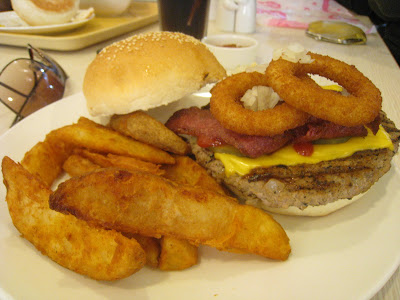 Located in a little alley near Dun Hua, I spotted a lot of features in Taiwanese magazines/papers about them, so maybe they had a little publicity in the past few months. Its "American/Mexican" specialties are more likely to impress locals than those who are looking for the real thing. 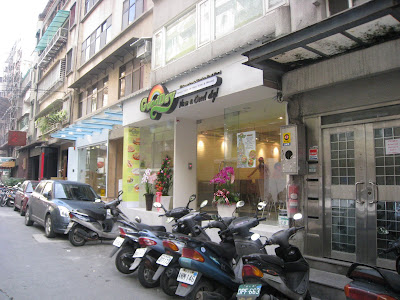 PS. Speaking of THE REAL THING? Can it be?

I was browsing the forumosa.net boards and spotted this thread about a little stand for burritos, quesadillas and sopapillas up in Danshui run by Mexican couple who uses recipes from their family with FRESH tortillas and sauces and prices like NT$79 a burrito.

I am crazy excited.... I may be making the trip there to find Eddy Burrito since the word of mouth on the forum is so positive. And.... handmade corn tortillas!

Check out their website for hours and info.
Posted by joanh at 10:43 PM

good luck with with eddy burrito. haha.. i looked at the site - the burrito looks like it's made more like wrap than a burrito - but hopefully it's still yummy inside!

that taco with the cheese on the outside looks kind of good - but not enough cheese! and i'll go buy some tostitos nacho cheese to send you.. hahaha.. oh and taco bell makes a really good dip too. hahahahah.. yay care package!

jean: thanks!! i will have to find time to go.. maybe they show it that way on the website to show the insides.
the cheese on the outside was kind of nasty since two tortillas was too thick. YAY care package.

The best thing at Good Day is the Cuban Sandwich, good stuff.

Oh, by the way, I've tried Eddy Burrito and they're not bad. What makes it good is that they hand make a fresh flour tortilla right there when you order. I still say La Casita is the best Mexican food you'll find in Taipei unless you're looking for fajitas, then I agree with you about Chili's.

billy: really.. that's good to know about the Cuban.. I will have to try Eddy's. I think La Casita does have the best enchiladas

I just saw some con queso dip at Carrefour in the import aisle.... (I even think it is Tostitos brand!)

anonymous: thanks for the tip! i actually got some in a care package, but it's good to know for the future (although it's probably like NT$200-300 or 2-3x the price, eh?)

I stopped by Good Day today to try out one of their burritos but when I saw they only had chicken I decided to try their nachos, I saw a picture on the counter and it looked pretty good. Their nachos are more like nachos supremes like you would get at fast food joints back home. I took a while because I think they cooked the chips when I ordered. It had beef, nacho cheese, tomatoes and onions and jalepenos. I liked it. Give it a try if you like messy nachos.

billy: sounds worth trying.. how much was it?

They're about half the price of the nachos at La Casita and they're a little bit better too. A little over $200 for the nachos alone. Sorry, I can't seem to remember exactly what the price was.

I tried Eddy Burrito and was not impressed. The tortilla was dry, the rice wasn't especially tasty, and the beans weren't very fresh either. They also give you these tiny tiny dishes of salsa, guac, and sour cream. Definitely not enough. The nachos were also kind of stale. My GF got the quesadillas which were quite good though. Also, Eddy's is now called Eddy's Cantina is now located at a restaurant. You can google his website for directions.

Eddys Burrito is not worth the trip! I live close by Eddys and I thought it was WAY to over priced! Plus they didnt even use cheese on anything! You cant have mexican food without cheese! I heard when they where in the stand it was amazing and as soon as they moved into a restaurant the food quality changed!

They just opened another Good Day near Exit 6 in Ximending. On the second floor of one of the buildings closeish to McDonalds.