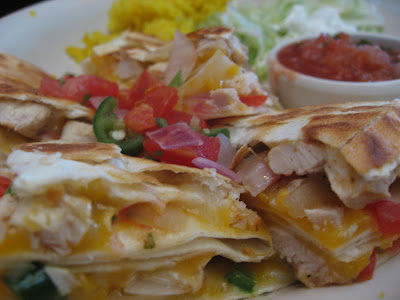 website: tgifridays.com.tw Mostly Chinese, though Menu has some English. Addresses are all in Chinese. :I

kid friendly?: Extremely. With both high chairs as well as booster chairs, kids menus, balloons, crayons and family ambience. TGIF was one of the most kid friendly places in Taipei with its American style "extras."

I think we unintentionally went Tex-Mex at this meal at TGIF. Usually, I prefer the atmosphere and food of Chili's to TGIF, but today at the Miramar location, I was pleasantly surprised. They had a special promo for appetizer, main dish and dessert for NT$599 (US $18). It sounds like a lot for lunch, but it was a lot of food! We chose the nachos, chicken fajita tower and chocolate cake dessert since they had run out of mud pie. 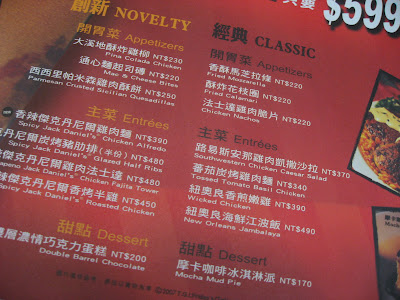 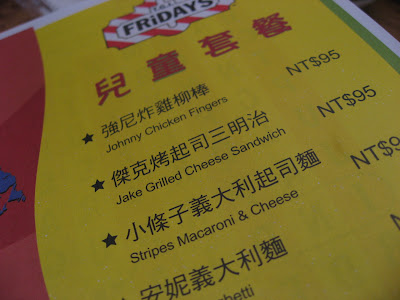 The nachos are less strange than the individually plated nachos at Chili's, but still no sight of the movie theater liquidy nacho cheese here. Pretty standard with jalapenos, sour cream, pico de gallo and guacamole to dip. 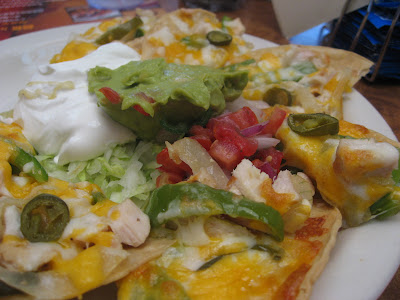 I don't know what I thought would be different about the chicken fajitas tower- it's basically just way to save room on the table by stacking the guac, salsa, cheese above the sizzling plate. I found the Signature Jack Daniel's chicken fajita's tower to be slightly too spicy and watery for my tastes. I preferred the way the chicken and steak is grilled at Chili's because the meat is more tender and doesn't make your tortilla soggy when you wrap it up. 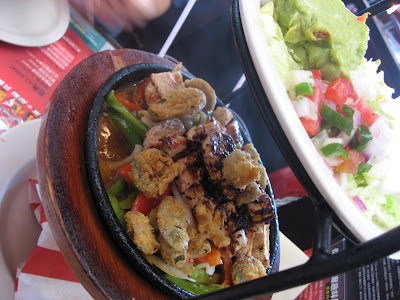 The double decker chicken quesdilla plate was pretty extreme- lots of cheese, but it was good. Hot and crispy- I liked this better than the fajitas. I wish they had given us more pico de gallo rather than salsa, and the yellow "Mexican" rice was mysterious. 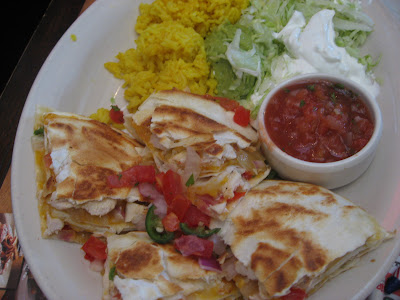 Typically, this chocolate cake dessert comes with chocolate mousse, but I don't like mousse and the waitress said they could make it ala mode instead. That was perfect! The cake was soft and light, yet very chocolately. Not as heavy as the mud pie or Chili's warm chocolate cake, but then you feel a little less guilty. 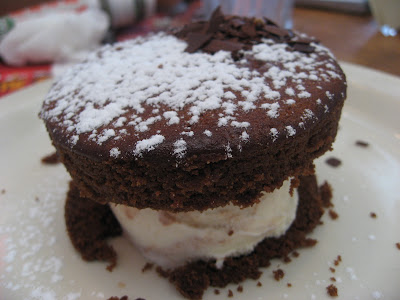 You'd find pretty much everything you'd expect with TGIFridays in the states- similar menu with huge portions including salads, pasta, ribs, hamburgers, sandwiches, appetizers, drinks and desserts, same bar/decorations, even the waiters have the same red and white stripe uniforms. It seems like the waiters at these international chains have been trained to have American style customer service- to give the customer a pleasant dining experience- unlike Taiwan service which is hit or miss depending on the venue.

The last time I went to a Taipei TGI Fridays was awhile ago and at a different location- I didn't love the greasiness and heaviness I felt after the dinner of I don't even remember what we ordered. Ribs and salad? I also think that the Miramar location was more airy and bright with lots of windows than the other locations I had previously been to, I think on Keelung and Chung Hsiao, and it helped that they were so extremely kid friendly to our party.

I don't know if some branches' food and service are better than others--- any opinions??

All in all, it is what it is. You probably won't here if you are coming from the states, looking for the beef noodle soup on Yong Kang St. But if you have been here for awhile and need some Tex Mex or Jack Daniel's ribs for your birthday party of 8, then TGI Fridays is not a bad place to be.


PS. SERIOUSLY, how hard is it to find addresses and phone numbers in English for Taipei restaurants?! (That's probably why you ended up here?)

Googled around for the different locations of TGIF and could find only 1 Taipei Times article. The US website froze on a blank page with loud music, but no Taipei info in sight.

You would think that it's not THAT hard to put English addresses for an American restaurant on your official website for all your non-Chinese reading patrons looking for info. Maybe they think that you automatically know where the restaurant is since you'd pass by their signs or your friends will take you there? TGIF and Company, are you listening?? Please put English addresses on your website. Thanks!

weeeee.. Its Friday!!! how appropriate to have a cold beer and a huge burger at TGIF

The Miramar Friday's is the best in town. The view is terrific. And if you sit at the bar, you can watch Asia's champion bartender do his tricks.

The TGI in Tian Mu is Closed

patrick: oh cool. thanks for the second opinion, though i didn't get to see the bartending tricks! is it like tom cruise in cocktail?? hhah

anonymous: oh ok. thanks! i will edit the post.

Damn I would kill for those nachos. They aren't listed in the web menu for some reason...

i totally shoul have gone there when i was in Taipei. I'm still disturbed by the nachos at Chili's, they were just so weird!

I would say the Miramar Friday's is the best. The one in Hsimen has been giving me trouble lately, as you read in my post on the survey they gave me. I didn't fill it out.

Also, sometimes the quesabillas taste fishy, like they have been cooked in a pan that had just had fish. Yuck.

jeff: it might have been on their seasonal menu..

ffc: hahah. now you can get nachos in cali!

taipeikid: hmm, that was the vibe i got. good to know. that's gross about the quesadillas though! did you complain?

This guy throws bottles around (with another guy - maybe a manager). The guy can catch a bottle of margarita mix and in the same motion finish pouring a drink. They also light ingredients on fire. Did Tom Cruise have a double for the bartending shots? If not, Cocktail can't match it.

With the new menus, the Mexican triple tower (your pic) is gone. They've got a Heineken special now: buy three bottles and get the deep-fried jalapenos (from the triple tower). These mexi burgers are really good: http://www.flickr.com/photos/patrick_cowsill/1672237714/

patrick: mm, mexi burger sounds good. yes, I went a few weeks ago and had the double glazed ribs with onion rings. pretty good and seemed cheaper/same as the states.

I think TGIF is getting complacent. When my husband and I went for baby back ribs and sirloin nachos last night, the dishes were lukewarm. We gave the feedback to the chef but there was no response.
The most unfortunate part of the experience happened last night. I was up with stomach cramps, bloating, burps every 30 minutes. After 2 diarrhea bouts and a doctor's confirmation, it is confirmed to be food poisoning.
Disappointed with TGIF.

Hwee: oh no! Sorry to hear, which location was it so we can avoid it!!!!