ED NOTE (6/15/2007): Tried to go there last night with relatives after discovering that Jiu Ru was only selling zong zi for zong zi season. But, the windows were dark and a sign with their new address was there, along with another group of confused would-be customers. Boo hoo!!! Will post the new address soon, but I think I overheard my uncle say that the new place is izayaka style so more like a bar/cafe. Hm. 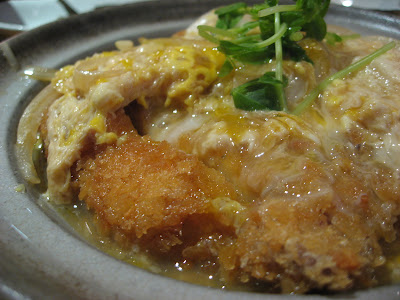 kid friendliness: no high chairs, no booths, but friendly servers & room for strollers


We wandered down a lane behind the Dun Hua Sogo looking for a place to lunch- past the mom and pop noodle shops into Kitchen Kamakura not sure what to expect. I felt like I could have walked into a shop in Japan with the food, flavors and ambience at Kitchen K with its calm, modern (and yes, Zen-like) atmosphere and a few scattered customers. With the daily specials on the wall in Japanese, the menu was only in Japanese and Chinese with a few pictures, with most dishes ranging from NT$300-400. 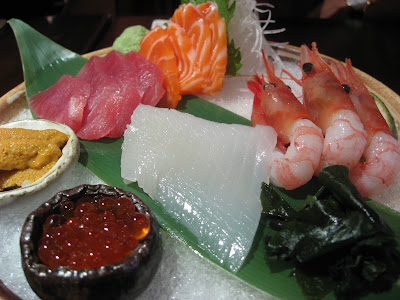 We started off with a sashimi platter to share, and it was surprisingly fresh and well presented from my expectations. I got to eat most of the uni (YAY!) and the rest of it melted in my wasabi soy-sauced mouth. 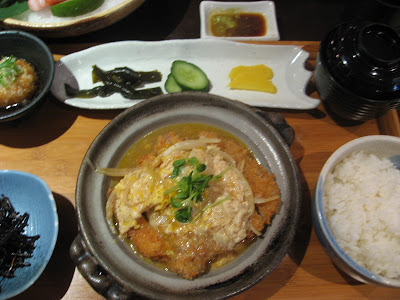 I was very happy with my choice of the tonkatsu-don, which is a deep fried pork cutlet bathing with a soft scrambled egg pool. It came as a set menu, with a bowl of miso soup, a big bowl of white rice, tsukemono or some pickled vegetables and seaweed and a fried tofu-like ball (which I am trying to figure out the Japanese name for!) 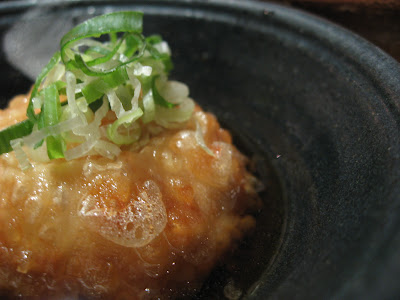 what is this called??


The portion was sizeable for the price and it was one of the best tonkatsu-don's I've had in a long time. I like my egg a bit soft to wash down the hardness of the steamed rice, and I didn't mind that it was even a little soupy that made the already tender katsu a bit soggy- that's sort of the whole point. I didn't like the tofu ball enough to finish it- very mushy texture and lacking in flavor like the sesame one I had at Peony(though the rest of the food here had Peony beat by a long shot). My friend who had the unagi-don or the eel equivalent of mine also polished his dish. We traded bites and his eel was savory, soft and slightly sweet- just right. 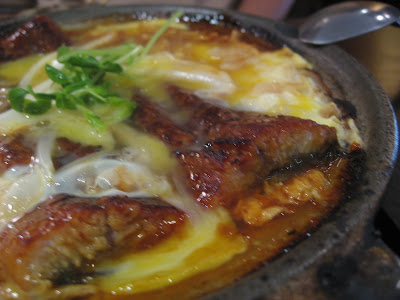 My other friend ordered a grilled chicken, which seemed lonely and plain next to our meats which were chilling out in their glorious eggy baths. The table consensus was that hers was our least favorite. Good, but ordinary. 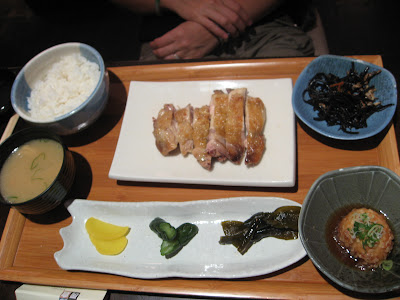 We might have been a bit greedy, as I ordered a side of steak as well. It was simply grilled with a bit of wasabi sauce on top. 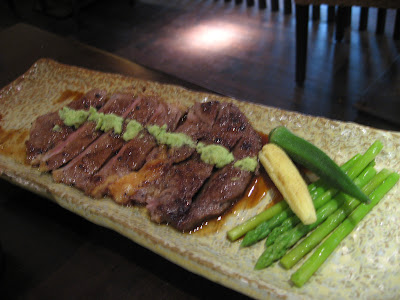 Included in the set menu was a red bean dessert and choice of hot/cold tea/coffee- we had to rush so I didn't try the dessert, but for the price and taste (in contrast to other similarly priced eateries) I will definitely be back! 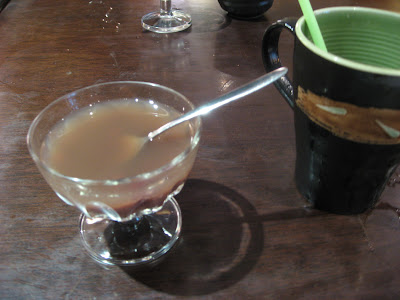 this place looks SO GOOD. i love uni too :) one of the reasons i like blue marlin is because of their uni pasta.

this looks really enticing,
thanks - now i'll have a place to take my mom next week :)

ffc: I will have to try the uni pasta again. we usually get the black pork tonkatsu at blue marlin

a_w_g: sorry, i don't know if the new place will have the same food! be sure NOT to go to the address on this post!