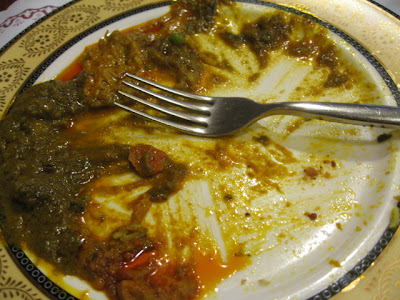 the buffet trays were practically this empty

It's 1:20PM and the natives are getting restless. For at least 30 minutes, more than 80% of the trays have been table scraps- bits of meat in curry or last few bites of oily veggies in curry or the bed of onions that usually houses the tandoori chicken.

Well, there's rice. And it's good rice because I'm starving.

The restaurant is half full and quickly fills up with new tables of customers- each one eyed like competition for the new food when it comes out.

it ever comes out.

Everytime the kitchen bell *dings*, all eyes dart towards the kitchen to see what's coming out. Scenario from a game show? No, Sunday afternoon lunch buffet at Aaleja. My first time at the weekend buffet and most definitely my last time- I'm too disappointed to be angry really. From the bits and pieces of meat and curry I've gathered with my rice, the flavors are quite distinct and hearty, (if not a bit oily). The eggplant, the lamb, the beef, the vegetable curries all mildly spiced for a wider range of tastebuds.

Some garlic and plain naan makes it way to our table to fill us up, but it's heavy as a pizza without any toppings. It's not fluffy and magical like I'm used to. 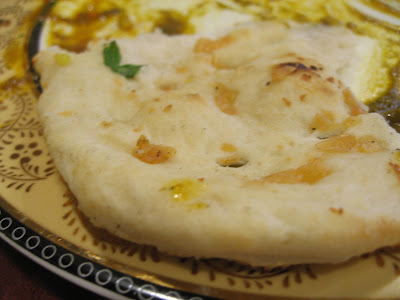 was the naan always this dense?

The waitress half heartedly apologizes to us in Chinese saying that "everything is made fresh to order" when we complain that there's nothing to eat. I hear her echo that to at least four other tables in the room. Sure I can sort of understand if you are packed busy and my food is going to take some time to get to me. But it's a weekend buffet! Aren't you supposed to be prepared with trays and trays of food- it's not time to be "making things to order"? Refill it before it even gets close to running out, not to mention making customers wait for an hour with no results.

I've filled up on juice, rice and curry and managed to snag a few pieces of tandoori chicken that must have been on a diet, and my friend managed to get two samosas. There's no hope left for us getting anything else coming out of the kitchen in our lifetime, especially with a full house now of at least 40 customers and the hungry newbies milling about the still empty trays. It's like that episode of Survivor where all the contestants are drooling at the mere promise of food and we'd pay NT$399 even though we don't know what we're getting- in this case, not our money's worth. 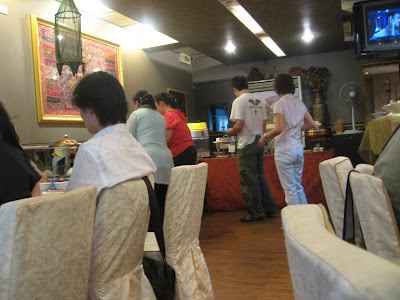 Couldn't have been that bad? I can't believe it still and I was there. Honestly, it was the first time I wanted to walk out of a restaurant and refuse to pay. We should have, maybe it would have made them get their act together. Hello, Aaleja management- it's a weekend brunch BUFFET, please hire more chefs and don't run out of food in the first hour of your buffet! Is there any decent weekend Indian buffet in Taipei?

what about the last time I ate at Aaleja?

Email ThisBlogThis!Share to TwitterShare to FacebookShare to Pinterest
Labels: $$ depends on what you eat, area- Da An, buffet, hungry girl in taipei doesn't recommend, indian

i went to a different Indian buffet in taipei and it was also pretty bad. generally, i think indian food is great but i've never had good indian food at their weekend buffets.

their room have so many tables,
they always have a lot customers,
why???
my friend have big party on this sunday too.
my friends very like their food,
but I first time go here.
if they can't make food quick,
I will go to here early,
but,our party start from 11:00,
we can take a lot food.
11:00~3:00 we can enjoy food,
I will ask my friend confirm the time.
thanks for your report.

ffc: really? i've had pretty good indian buffet experiences in LA. oh! Where else did you go so I can avoid it??

clerkstar: good luck! maybe it will be good/ they will be prepared since it's a big party! I hope so! I really wanted to like it, but they made it really hard. Let us know what happens!

I guess it depends on the day. I have been to Aaleja buffets on numerous occasions and found the food to be hearty and plentiful.

However, I have never seen them pack out, so that might have been the difference.

I agree that buffet indian food tends to be blander and less tasty than a la carte. But it doesn't always have to be so. Actually, I think Indian food is made for buffet because so much of it is stew based and keep warm very nicely.

In fact, the best indian meal I have ever had was the weekend brunch at the Bombay Brasserie on Cromwell Road in London, hands down.